The birth anniversary of Mohandas Karamchand Gandhi, considered as the Father of Nation is observed on October 2. He is highly regarded for preaching non-violence and fighting various social issues through it. 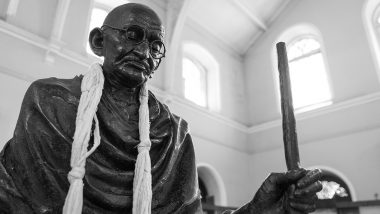 The birth anniversary of Mohandas Karamchand Gandhi is observed as Gandhi Jayanti. Born on October 2, he is considered as the Father of Nation. Better known as Mahatma Gandhi, the man is remembered for leading the country in its independence struggle against the British. He is highly regarded for preaching non-violence and fighting various social issues through it. The United Nations General Assembly commemorated Gandhi's values and the principles he followed by voting to establish October 2 as the International Day of Non-Violence on June 15, 2007. Mahatma Gandhi was born on October 2, 1869, in Gujarat's Porbandar. As Gandhi Jayanti 2019 approaches, we have compiled information about Gandhi and the day.

International Day of Non-Violence seeks to "disseminate the message of non-violence, through education and public awareness". The website states that the resolution reaffirms "the universal relevance of the principle of non-violence" and the desire "to secure a culture of peace, tolerance, understanding and non-violence. Gandhi Jayanti is observed across the globe where his teachings and life principles are explained. Schools, colleges, various government and private organisations observe the day by remembering Gandhi and his works.

Gandhi fought against social evils like untouchability, casteism and the right of the poor and the needy. Some people visit Sabarmati Ashram, where Gandhi spent quite some time. People also visit prominent places associated with Gandhi like Raj Ghat in Delhi and Mani Bhavan in Mumbai. Gandhi's favourite bhajan 'Raghupati Raghava Raja Ram's is played at railway stations, bus stands and other public areas reminiscing Gandhi.

(The above story first appeared on LatestLY on Sep 23, 2019 10:00 AM IST. For more news and updates on politics, world, sports, entertainment and lifestyle, log on to our website latestly.com).