Guru Arjan Dev ji, the fifth guru of Sikhs, was martyred on June 16, 1606. He had compiled the first edition of the Sikh scripture Adi Granth, which is now known as Guru Granth Sahib. Born in 1563 in Goindval, Tarn Taran district, Guru Arjan ji died after being tortured by the Mughals. The Shaheedi diwas of Guru Arjan Dev ji in 2021 is on June 14, 2021, Monday. 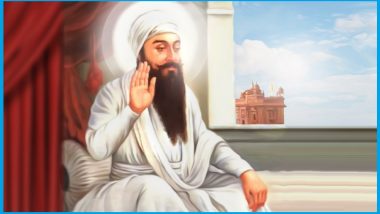 Guru Arjan Dev was the first martyr of the Sikh faith. He was executed on the orders of Mughal emperor Jahangir. The Mughals were afraid due to his increasing influence in Northern India and the spread of Sikhism.

He was also made to sit on a hot plate and hot sand was poured on his body. It is said that when Guru ji was allowed to take bath in River Ravi, he never returned. The exact place where Gurudwara Dera Sahib in Pakistan's Lahore stands.

On Guru Arjan Dev ji Shaheed Diwas, people often organise religious events where they read Sri Guru Granth Sahib. Langars are also distributed in Gurudwara. This year due to the second wave of COVID-19, no big event has been organised.

(The above story first appeared on LatestLY on Jun 13, 2021 11:53 AM IST. For more news and updates on politics, world, sports, entertainment and lifestyle, log on to our website latestly.com).