While everyone celebrate Dussehra 2020 as the end of the festival, in Himachal Pradesh's Kullu region people celebrate the start of another festive occasion with this day. Called the Kullu Dussehra it will commence from October 25 and go on for the next 7 days. 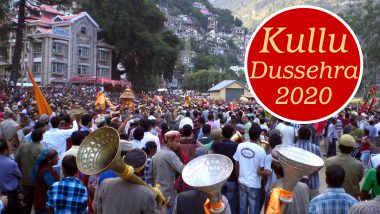 The festive season has come to an end. The nine-day celebration of Navratri 2020 ends with Dussehra on October 25. Also called as Vijayadashami, this day marks the culmination of Navratri. While everyone else celebrates it as the end of the festival, in Himachal Pradesh's Kullu region people observe the start of another festive occasion with this day. Called the Kullu Dussehra it starts from October 25 and go on for the next 7 days. This time the celebrations will be low-key because of COVID-19 lockdown and restrictions. Ahead of this annual festive occassion, let us know more about the dates, history, significance and celebrations.

Kullu Dussehra begins on the tenth day of the rising moon, the dashami tithi. This year, it starts on the day of Vijayadashmi ie October 25. The seven-day celebration will go on till October 31.

As per a legend, Maharishi Jamdagni, one among the Saptarishis went to hermitage at Malana. He carried a basket that was filled with images of 18 different gods. While crossing through the tedious Chanderkhani pass, there was fierce storm and the basket fell off. All the Gods' images were thrown off in distant places and it is believed that they took the form of deities. So a deity worship began in Kullu valley.

The celebration of Kullu Dussehra is linked to worshiping Lord Raghunath. A deity of Lord Raghunath was taken away by a Brahmin from Ayodhya to the Kullu King Raja Jagat Singh. The king was cursed of ill fate by a peasant who held pearls of wisdom and knowledge. The Brahmin had stolen the deity to lift off the king's curse. On reaching Kullu Ragunath was installed as the reigning deity of the Kullu kingdom. After installing the diety, the curse was lifted and from this day onwards, the deity is taken in a Ratha in a procession on Dussehra.

Kullu Dussehra is a massive event which sees a massive turnout of over thousands of tourists every year to Himachal Pradesh. The celebrations sees palanquins and a procession of Lord Raghunath along with other deities. All the major festivities take place in the Dhalpur maidan. There are several cultural events and entertainment programmes for all the guests visiting here for the festival. Thousands of people from all over the country and world visit this place during Dussehra. The last day of the celebrations sees a sacrifice and a big bonfire celebration.

This time the celebrations have been toned down and everyone will have to strictly follow the social distancing protocols at all times. Only 7 deities will be a part of the procession, unlike 250 to 300 deities in previous years. The Kullu district administration decided that palanquins will be allowed and only 200 devotees will be allowed to pull the chariot of Lord Raghunat.

(The above story first appeared on LatestLY on Oct 25, 2020 12:34 PM IST. For more news and updates on politics, world, sports, entertainment and lifestyle, log on to our website latestly.com).