Here's How Basant Panchami is Celebrated Across India

Get latest articles and stories on Lifestyle at LatestLY. Basant Panchami, the festival which marks the arrival of the spring season in India, would be celebrated on February 16, this year. Held on the fifth day (Panchami) of the Magha maas (month), Basant Panchami is also celebrated as Saraswati Puja in some parts of the country. 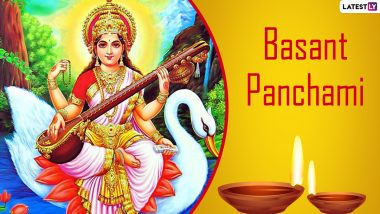 New Delhi, February 15: Basant Panchami, the festival which marks the arrival of the spring season in India, would be celebrated on February 16, this year. Held on the fifth day (Panchami) of the Magha maas (month), Basant Panchami is also celebrated as Saraswati Puja in some parts of the country.

Festivals in India are all about harmony and togetherness, in fact, the fun of the occasion is simply incomplete without good food and happiness. As per the Hindu Mythology, Lord Brahma is believed to have created the universe on this day.

Apart from that, the reason for the celebration of Saraswati Puja in some parts of the country is because it was believed that on this day Goddess Durga gave birth to Goddess Saraswati. The significance of the occasion is huge in Hindu culture, as the day is considered extremely auspicious to start new work, get married or perform house warming ceremony (Grah Pravesh).

Basant Panchami is predominantly, celebrated in eastern parts of India as Saraswati Puja, particularly in West Bengal, Bihar and north-eastern states like Tripura and Assam. The goddess, Saraswati is dressed in yellow, and flowers, sweets of the same colour are offered to her. People visit her temples and worship her.  Basant Panchami 2021 Fashion: Wear Traditional Outfits in Yellow Colour To Celebrate Saraswati Puja.

The colour yellow holds great importance in the celebration of Basant Panchami. It marks the harvest time of mustard crop that has yellow blooms, which is Goddess Saraswati's favourite colour. Hence, yellow attire is worn by the followers of Saraswati. Moreover, a traditional feast is prepared for the festival wherein the dishes usually are yellow and saffron in colour.

In North India, especially in Punjab and Haryana, Basant Panchami is celebrated as a festival of kites. Sweet rice is one such mouthwatering dish served in Punjab. Other dishes include Makki ki roti and Sarso ka saag. The sight of wide patches of fields filled with mustard crops is another characteristic of this season. In Rajasthan wearing jasmine garland to celebrate this festival is a part of the rituals. Basant Panchami 2021 Dos & Don’ts: How to Perform Saraswati Puja at Home? Know Puja Rituals and Mantras to Worship the Goddess of Learning and Arts.

In the southern states of India, the festival is celebrated as Sri Panchami. Yagnas are done in schools and colleges as students celebrate with great sincerity and fervour. It is believed that Goddess Saraswati bestows her devotees with lots of wisdom, learning and knowledge, as the goddess is considered to be an epitome of wisdom.

Students and teachers wear new clothes, offer prayers to the goddess of knowledge and various programs of song and dance are organised to please her. Usually, toddlers start learning from this day in a unique ceremony named 'Khadi-Chuan'/Vidya-Arambha.

The festival is celebrated by people in various ways depending upon their region in the Indian subcontinent. Basant Panchami also marks the start of preparation for Holi, which take place forty days later. (ANI)