India is a popular tourist destination among foreigners. One of the world’s 7 wonders; the Taj Mahal is in India. Kumbh Mela: The vibrant and magnificent Kumbh Mela is known to be the largest cultural gathering in the world, breaking records each passing year. 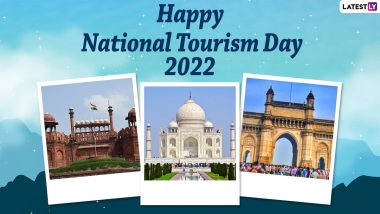 India is known to the world for its prosperity, natural beauty & resources, eternal wisdom, diversity, culture and heritage, since ancient times. It is India’s traditions that are so deeply intrigued and delicately woven in our day-to-day lives that attract tourists from foreign lands to visit India.

The National Tourism Day is celebrated every year on 25th January to celebrate, not just India’s rich cultural heritage, but to commemorate the contributions of the Tourism Industry in expanding India’s economy & glory. Tourism contributes to 9.2 % of India’s GDP: The Tourism Industry’s contributions to the Indian economy are pleasing! National Tourism Day 2022: From Kaziranga National Park in Assam to Ajanta and Ellora Caves in Maharashtra, Visit the Vast Heritage of India.

As per the World Travel and Tourism Council’s calculation, tourism in India earned ₹16.91 lakh crore, which accounted for 9.2% of India’s GDP in 2018. The tourism sector is predicted to grow at an annual rate of 6.9% to generate ₹32.05 lakh crore by 2028.

Tourism Accounts for 8.1 % of the Country’s Employment:

The World Travel & Tourism Council’s report further elucidated that the tourism industry provided 42.673 million jobs, which is 8.1% of the country’s total employment, in the year 2018. Indian Tourism sector: ‘fastest growing in the world’.

According to the WEF report, “India has moved up six places to rank 34th on world travel and tourism competitiveness index, owing to India’s rich natural and cultural resources and strong price competitiveness.” Indian tourism sector is one of the fastest growing sectors in the world.

India is a popular tourist destination among foreigners. One of the world’s 7 wonders; the Taj Mahal is in India. Kumbh Mela: The vibrant and magnificent Kumbh Mela is known to be the largest cultural gathering in the world, breaking records each passing year.

In 2011, the Kumbh Mela witnessed over 75 million pilgrims, a gathering so magnanimous, that it was visible, even from the space. The Kumbh Mela is not just of great cultural significance, but it is also one of the biggest commercial events in India’s tourism sector.

Indian tourist destinations have featured significantly in Indian and International Cinema, which is another reason for India being a top destination for people across the globe. Iconic movies like Lagaan, Slumdog Millionaire, and Eat Pray Love have stimulated people’s interest in India, making them to plan a pocket friendly trip to this land of diversity.

State of Tourism During the Pandemic:

Few months back, in an unforeseen move to mitigate the virus spread, the Indian railways and other modes of transport were put to a halt for the first time in India’s history, slogans like #Stayhome#staysafe were coined.

However, the global Covid-19 pandemic and the consequent lockdowns that disrupted lives and forced global economies to witness downward trends couldn’t shatter India’s grit. When the wheels of transport were halted in the country, Indian brains ran at 2x speed to provide unique solutions to dynamic problems. Tourism in India went virtual this year, amidst the Covid-19 pandemic. In an exemplary move, the National World Book Fair, 2021 being conducted by the National Book Trust, under the Ministry of Education has announced the commencement of a virtual book fair this year.

(The above story first appeared on LatestLY on Jan 24, 2022 06:06 PM IST. For more news and updates on politics, world, sports, entertainment and lifestyle, log on to our website latestly.com).