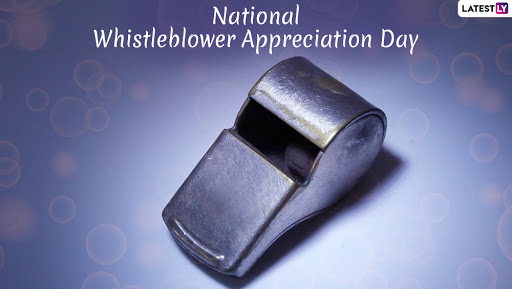 Whistleblowers around the world are those people who bring the truth behind any misconduct, frauds or misdemeanours committed by any persons in the service for the welfare of people. Honouring the silent heroes for their brave act is what National Whistleblower Appreciation Day is all about. Today all the Americans are honouring the whistle-blowers who changed the course of history of the great nation, which was one on the way to prosecute two whistle-blowers that had exposed misconduct by the highest-ranking US naval official on July 30, 1778.

National Whistleblower Appreciation Day is celebrated across the United States and some of the democratic countries, in order to appreciate and give recognition to whistleblowers whose actions have protected the American people from fraud or malfeasance. With atrocities, security threat and inhuman behaviour rising for the whistleblowers across USA for whistleblowers, the US Senate in 2018 unanimously passed a resolution to mark July 30 as the commemorative day. The resolution was tabled in the US Senate by Senator Charles Grassley, who worked in a bi-partisan manner with Senator Levin to ensure that this day would be honoured. Juneteenth, 134th Anniversary Special: Date, Significance, Legal Status of 'Freedom Day' for Enslaved African Americans in USA

Though history shows that Continental Congress passed world’s first whistleblower law on July 30, 1778, to demand the ruling dispensation to rise against what's wrong, National Whistleblower Appreciation Day is celebrated to remember the sacrifices whistleblowers have endured to protect the public interest. It must be noted that whistleblowers can be from various fields - media, defence, railways, banks, universities, film industry, among others.

Here's some remarkable Whistleblowers who changed the course of history:

1. Mark Felt: Remember Watergate scandal! Yes this former Associate Director of the FBI was the secret informant who leaked information about President Richard Nixon's involvement in the Watergate scandal. He used to help Washington Post reporters Bob Woodward and Carl Bernstein. Known as deep throat, Felt's service led to the resignation of the president, and prison terms for White House Chief of Staff HR Haldeman and presidential adviser John Ehrlichman.

2. Daniel Ellsberg: Another whistleblower whose service to the great country revealed how the United States came to fight the Vietnam War. The former RAND Corp. military analyst who, along with Anthony Russo, leaked the Pentagon Papers to the New York Times, stating the endemic practices of deception by previous administrations. Along with it, the employee of the State Department in 1971 revealed secret papers contributed to the erosion of public support for the war. To protect the classified secret information becoming public, the Nixon government moved Supreme Court, but the appeal was rejected and later the reports came out in NYT and The Washington Post. International Workers' Day 2019: Date & Significance of The Proletariat Festival Commemorating Struggle to Achieve 8-Hour Working Day

3. Linda Tripp: Recalling the Monica Lewinsky scandal which shook the President Bill Clinton government, this former White House staff member was a key figure who disclosed to the Office of Independent Counsel that Monica Lewinsky committed perjury and attempted to suborn perjury. Tripp also revealed that President Clinton committed misconduct, by denying the Clinton-Lewinsky relationship in the Paula Jones federal civil rights suit during his second term. Due to the revelation, Tripp became victim of retaliation by the Clinton Administration and later successfully sued them for US $595,000.

4. Coleen Rowley: Like several other brave hearts, the Federal Bureau of Investigation special agent blew a controversy in 2002, revealing that the State Department failed to act on information provided by agents in Minnesota about one of the figures in the terrorist attacks of September 11, 2001. For her brave act, she was jointly named Time's People of the Year in 2002.

5. Karen Silkwood: Considered as first prominent nuclear power whistle-blower, Silkwood rose to fame for exposing corporate practices related to health and safety of workers in a nuclear facility. The Chemical Technician, employed with Kerr-McGee nuclear plant, became an activist in the Oil, Chemical and Atomic Workers International Union in order to protest health and safety issues. She was testified to the United States Atomic Energy Commission about her concerns in 1974 too. However, she died mysteriously in 1974. A film - Silkwood, starring Meryl Steep, was made in 1983 in an account of this story. International Workers’ Day 2019 or Labour Day History: Date & Significance of the May Day Dedicated to Working Class

Considering the enormous sacrifice of brave whistleblowers, the list is long. As governments shook and fear these brave hearts, a grand appreciation and applaud is what need for them to uncover the filthy corrupted practices. Several movies, inspired by whistleblowers lives, have been successfully made - Serpico (1973), The Informant (2009), The Insider (1999), among others.