Lord Rama is a significant deity, and he is believed to be the seventh reincarnation of Lord Vishnu. He was born to Kaushalya and Dasharatha in Ayodhya. On the auspicious occasion of Ram Navami 2020, know the legend of Lord Rama to mark his birth anniversary. 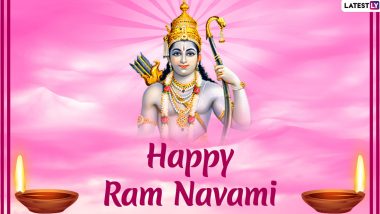 The auspicious occasion of Ram Navami will be celebrated on April 2, 2020. Rama Navami is a religious and significant observation among the devotees in India. Although this year’s celebration will not be as grand as it usually is because of the nationwide coronavirus lockdown, devotees will follow the rituals at home. Lord Rama is a significant deity, and he is believed to be the seventh reincarnation of Lord Vishnu. He was born to Kaushalya and Dasharatha in Ayodhya. While the festival originates from the legend of Rama, it also includes the worship for Sita, Lakshmana and Hanumana, owing to their essential connection to the Lord Rama’s story. On the auspicious occasion of Ram Navami 2020, know the legend of Lord Rama to mark his birth anniversary. Happy Ram Navami 2020 Wishes in Advance: WhatsApp Stickers, Facebook Greetings, GIF Images, Messages And SMS to Celebrate the Birth of Lord Rama.

King Dasharath who ruled the Kingdom of Ayodhya, now in Uttar Pradesh, India had three wives, Kaushalya, Sumitra and Kaikaye. Despite being rich, the King and Queens were sad as they had no children. On the advice of the councillors, the King called and consulted several astrologers and saints to find out a way. Legends believe that King Dasharath was cursed by Ravana, King of Lanka, now Sri Lanka. Known as the ten-headed King, Ravana was a scholar, well versed in the Vedas and all Scriptures. After King Dasharath refused to acknowledge his superiority and give away his kingdom, Ravana went on a severe penance to worship Lord Brahma. When Brahma appeared, he asked King Dasharath should not be blessed by children. His wish was granted.

King Ravana began to terrorise everyone, and the Gods wanted relief. Ravana, a great devotee of Lord Shiva, was believed to be immortal. No Gods could defeat him, and he never cared about humans, as he was sure no man could defeat him. The Devtas and Gods went to Lord Vishnu, requesting him to take birth at King Dashrath’s palace as his son, so to kill Ravana. Meanwhile, King Dasharath was advised by sage Vashishtha to perform a powerful Yagna. The God of Fire appeared with a pot of Payasam and asked the King to feed it to his three Queens. That is how Lord Rama was born. King Dasharath had four sons, the eldest was Rama born to Kaushalya, second was Bharat born to

Kaikaye, and the other two were Lakshman and Shatrughan born to Sumitra.

Rama and his brothers were born to Kaushalya and Dasharatha in Ayodhya. To celebrate Lord Rama’s birth, we celebrate Ram Navami.

(The above story first appeared on LatestLY on Mar 28, 2020 11:00 AM IST. For more news and updates on politics, world, sports, entertainment and lifestyle, log on to our website latestly.com).