World Rhino Day 2020 Date, History and Significance: Know Everything About the Day Dedicated to Raise Awareness and Protecting the Rhinoceros 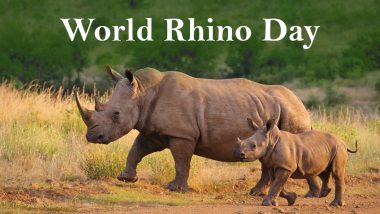 World Rhino Day 2020 is on September 22. Rhinos are one of any five extant species of odd-toed ungulates in the family of Rhinocerotidae, as well as any of the numerous extinct species therein. Every year, on this day, World Rhino Day is observed to celebrate all the species of rhinos—Black, white, greater one-horned, Sumatran and Javan and protect them. Rhinoceros are threatened by poaching, urbanisation and pollution, which have left certain rhino species on the brink of extinction while leaving others severely endangered. As we celebrate World Rhino Day 2020, in this article, we bring you the history, significance, theme and why September 22 is dedicated to raising awareness about the rhinos. Poachers Kill Rhino in Assam’s Kaziranga National Park, Horn Hacked Off, First Poaching Since April 2019.

World Wildlife Fund, South Africa, first planned to observe World Rhino Day in 2010. In 2011, Lisa Jane Campbell of Zimbabwe and Rhishja Larson joined forces to promote World Rhino Day. Ever since then, on September 22, every year, World Rhino Day is celebrated across the globe to raise awareness about the rhinoceros.

It was in 2010, when the plight of rhinos was not known to people around the world. People were not really aware just how close were coming to the total extinction of this majestic species. This is why, in that year, the WWF South Africa announced World Rhino Day in an effort to save the world’s remaining rhinos, in an effort that grew to be an unprecedented success. In 2011, Lisa Jane Campbell of Chishakwe Ranch in Zimbabwe sent an email to Rhishja, a fellow lover of rhinos who wanted to see the five species of rhinos in the world continue to thrive. This is how World Rhino Day was formed, and every year on September 22, the day is celebrated across the globe. Rhino Chases Safari Jeep For 500 Meters in South African National Park.

Rhinos are critically endangered species. At the start of the 20th century, there were over 500,000 rhinos across the world. However, human activity has caused a dramatic decline in the rhino numbers. Poaching and illegal trade of rhino horn have increased sharply since 2007 and remain one of the major reasons; rhinos are still endangered today. World Rhino Day 2020 is a day dedicated to the magnificent animal species, focussing on how we can save them.

Celebrate World Rhino Day 2020 by educating yourself on the plight of rhinoceros in our modern world and what we can do to help save those that remain. Rhinos are such as an impressive symbol of strength, resilience and tenacity that it would be heart-breaking to have those traits disappear.

(The above story first appeared on LatestLY on Sep 21, 2020 05:16 PM IST. For more news and updates on politics, world, sports, entertainment and lifestyle, log on to our website latestly.com).