World UFO Day 2021: Why Is UFO Day Celebrated? From Date, History and Significance, Here's Everything You Need To Know About The Day

Ever wonder why World UFO Day is observed across the world? Here's your answer to all your Extra-Terrestrial related questions. From When, why and where we've got you covered. Here's everything you need to know about UFO Day. 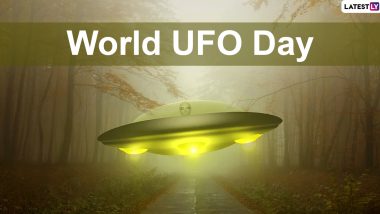 Our perennial curiosity on the mystery shrouding UFO's will probably outlive us all. Movies like E.T and Independence Day with a secret government UFO  bunker has only made us wonder if a flying saucer will ever descend upon earth. Years of speculation and rumination has finally led to the designation of a day that urges folks to acknowledge the existence of Unidentified Flying Objects hovering around the earth. World UFO Day is observed on 2 July every year to raise awareness about UFOs and Extra-Terrestrial beings. The day aims to educate people around the world about the UFO or a saucer-like object that often been discovered by the air-force personnel hovering in the night sky.  While we can't provide conclusive evidence on UFo we can satiate your curiosity by at least expounding on the history and significance of this day. Here's everything you need to know about UFO day.

When is UFO Day Celebrated?

The dates vary in many countries. Some countries celebrate this day on June 24 since the date signifies the day pilot Kenneth Arnold reported a UFO sighting for the first time in the United States. However, It is widely observed on July 2 as it commemorates the day when the Roswell UFO crash of 1947.

Why Is UFO Day Celebrated? (History and Significance)

The first World UFO Day was celebrated in 2001 by the World UFO Day Organisation (WUFODO) decided to celebrate this day on 2 July where UFO enthusiasts can gather and bring irrefutable evidence on the existence of UFOs. They decided on that particular date of the Roswell Incident of 1947, as it widely regarded that on that day and year that the world was provided with somewhat substantiated proof on the existence of these objects.

Roswell incident was a  top-secret project by the US Army Air Forces who claimed was set up to detect Soviet nuclear test explosions. The project involved flying mechanisms - that involved a weather balloon -   crashed on a desert near Roswell, New Mexico in 1947. However, people claim that a spacecraft crashed in the area and not the ballon as the government claimed. This basically spurred copious conspiracy theories around UFo and its alleged cover-up by the government. Many movies and books were birthed out of the said conspiracy.

(The above story first appeared on LatestLY on Jul 02, 2021 09:13 AM IST. For more news and updates on politics, world, sports, entertainment and lifestyle, log on to our website latestly.com).