Read up on these books about UFOs that are informative, baffling and totally entertaining which might just prompt you to say "I want To Believe." 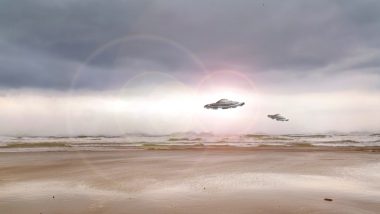 It's time to amp up those conspiracy theories about flying soccers and little green aliens hovering in the earth atmosphere, peeps. World UFO Day will be celebrated on July 2. Amid reports of the pentagon finally copping up to the existence of  Unidentified Foreign Objects and thwarting the belief that they are not merely a figment of an eccentrics imagination, celebrations this year will not be limited to the tin-foil hat bearer in our midst. UFOs have always been shrouded by intrigue and mystery amplified by conspiracy theories on social media, TV shows, movies and science fiction novels. These entities have always stoked the fires of our UFO curiosity. In this article, we'll provide you with a few choice novels that fall on the X-Files spectrum that might just make a believer out of you.

While the Pentagon didn't deliver any substantive proof on their existence they did say that they have crossed paths with hovering unidentified objects in the dead of night. While the report was rendered inconclusive, it's enough to keep the momentum on. If not,  read up on these books that are informative, baffling and totally entertaining which might just prompt you to say "I want To Believe."

In this book, Reeves sets on an exploration mission across the US in search of Extraterrestrial Beings. During her travels, she meets many interesting folks before making contact with real Space People via the wonders of Outer Space Communication (OSC) and a portable tape recorder where she lands answers to pertinent questions like is the world ending.

Historical documentation of unexplained events, this books chronicles interviews and official documentation detailing UFO research and spottings during the second world war to the cold war.

An investigative Journalist, Conroy examines Whitley Strieber's alleged alien abduction - that is one of the greatest literary mysteries of all times. It also explores UFO history with in-depth research. Completely engrossed in his writings, Conroy by the ned of the book begins to wonder if he's had any contact with these beings.

In this book, Hansen doesn't just limit his reach to UFOs but as a former professional laboratory parapsychologist, he casts a wider net into all things paranormal. Hansen believes that Tricksters are living among us and can be found everywhere in human society. Drawing on anthropology and folklore, Hansen tries to convince us that Tricksters can be fond of lurking around the most powerful institutions in this world.

An intriguing read, this book written by Vallee - a French astronomer and computer scientist - chronicles the time she worked with J Allen Hynek in the 1970s and was ensnared in bizarre mind games while investigating UFOs.

(The above story first appeared on LatestLY on Jul 01, 2021 05:08 PM IST. For more news and updates on politics, world, sports, entertainment and lifestyle, log on to our website latestly.com).