Bird Flu Outbreak: Should Eggs and Chickens Be Avoided? Here's What WHO Recommends

While states are on high alert, people have started avoiding the consumption of eggs and chicken. However, the bird flu is not yet detected in the poultry birds. 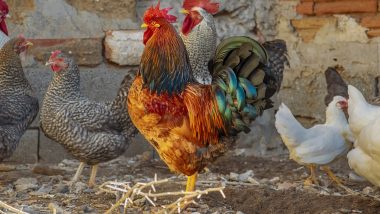 New Delhi, January 7: The outbreak of bird flu (H5N1) or Avian influenza, detected in parts of Rajasthan, Madhya Pradesh, Himachal Pradesh and Kerala, has triggered panic and fear across the country. While states are on high alert, people have started avoiding the consumption of eggs and chicken. However, the bird flu is not yet detected in the poultry birds. Bird flu has so far been detected among wild geese in Himachal Pradesh, crows in Rajasthan and Madhya Pradesh and ducks in Kerala. What Is Bird Flu? Which States Have Been Affected by Bird Flu in India? All FAQs on H5N1 Avian Flu Answered Here.

Bird flu is a contagious viral disease caused by influenza type A viruses, which affect poultry birds such as chickens. According to the World Health Organisation or WHO, H5N1, is a type of influenza virus that causes "highly infectious, severe respiratory disease in birds called avian influenza". People in the affected-states have started to ditch eggs and chicken meat in fear that it might carry the H5N1 virus and could infect the ones who would consume it. Bird Flu in India: All You Need To Know About H5N1 and H5N8, the Avian Flu That Has Killed Many Birds in Several States.

Notably, there is no connection between the spread of bird flu and the consumption of eggs. The risk of human-to-human transmission of the H5N1 virus that causes bird flu is very rare. The virus may be transmitted to humans from birds if someone works in proximity to the infected birds. According to the WHO, it is "safe" to eat eggs and chicken as long as they are "properly prepared and cooked".

Normal temperatures used for cooking (70 degrees Celsius) can kill the virus. "As a standard precaution, WHO recommends that poultry, poultry products, and wild game birds should always be prepared following good hygienic practices and that poultry meat should be properly cooked," it adds. Experts in India have also advised the public to give up eating raw meat and eggs in the affected region till the cases come down.

(The above story first appeared on LatestLY on Jan 07, 2021 07:44 PM IST. For more news and updates on politics, world, sports, entertainment and lifestyle, log on to our website latestly.com).