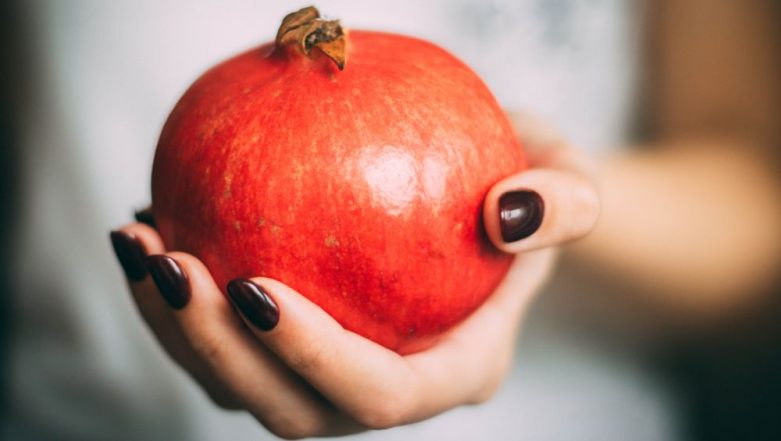 Pomegranate is a widely-eaten fruit, which comprises a thick skin and ruby-red gem-like arils inside.  In Hindi, pomegranate is called anar and it is prized for its taste and health benefits. Pomegranate is teeming with antioxidants and many beneficial bioactive compounds. But did you know that pomegranate can also be used for fighting erectile dysfunction and impotence? Forget Viagra, a glass of pomegranate juice a day can help you treat erectile dysfunction. This week’s home remedy focuses on the use of pomegranate juice for impotence. If you want to know how the fruit helps in correcting male sexual dysfunction, read on. Watermelon Works Like Natural Viagra: Here’s What Makes This Summer Fruit Great Cure for Erectile Dysfunction and Improve Sexual Life.

Erectile dysfunction, also known as male impotence, is a sexual problem where the man fails to get an erection. It can either be a psychological problem or a physical problem. It’s mainly caused due to weak blood blow towards the men’s genitals. When blood doesn’t gush towards the tissues of the penis, men fail to achieve an erection. If erectile dysfunction is not caused by underlying health conditions such as heart problem or diabetes, pomegranate can be used to improve sexual performance in men. Sex Query of the Week: Is There a Natural Viagra Without Side Effects for Erectile Dysfunction?

Pomegranate is known as a natural Viagra, meaning, it can be used to treat erectile dysfunction. It is believed that a glassful of pomegranate juice a day can help men beat impotence and have an improved sex life. Studies have been able to show that drinking pomegranate juice may have some tangible benefits. A randomised, placebo-controlled, double-blind study showed that 47 percent of the subjects with mild to moderate erectile dysfunction noted an improvement in sexual performance.

Researchers believe that the rich antioxidant contents in pomegranate prevent the free radicals in the body from disrupting blood circulation. Studies have been able to prove that pomegranate can improve the flow of blood and remove plaque formation from the arteries. Since good circulation is important for achieving an erection, it’s clear why pomegranate is one of the best remedies for erectile dysfunction.

Pomegranate juice also increases the levels of nitric oxide synthase in the blood. Although it's not a source of nitrates, it helps in increasing the concentration of nitrates in the human body. And nitrates create nitric oxide, which helps in the dilation of blood vessels and the proper flow of blood.