It all started with a small cut on her right thumb that, over a month, turned into a big wound because the flesh-eating bacteria kept destroying the skin tissues. Jayne Sharp had to undergo various surgeries to get the destroyed chunks of skin cell tissues removed. Watch Video. 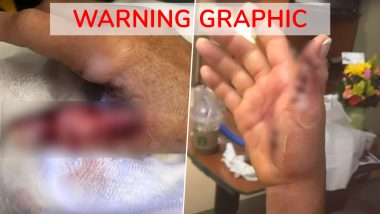 Nail salons, spas and fish pedicure centres are extremely popular; however, hygiene issues have always been a significant concern. Recently, a Tennessee woman almost lost one of her arms after contracting a flesh-eating bacteria at her local nail salon as per Fox News. It all started with a small cut on her right thumb that, over a month, turned into a big wound because the flesh-eating bacteria kept destroying the skin tissues. Jayne Sharp had to undergo various surgeries to get the destroyed chunks of skin cell tissues removed. Sharp claimed that her symptoms began after she suffered a cut on her right thumb while getting a manicure at Jazzy Nail Bar in Knoxville. This cut caused her immense pain, although, in the beginning, it looked quite harmless. It only got bigger, later on making it difficult for her to sleep. She said, "While I was there, I got stuck on my thumb, and I went 'ouch', but I went back to looking at my telephone," she told WBIR-TV. Buruli Ulcers: All You Need to Know About The Flesh-Eating Disease That Is Taking Over Australia.

What is Necrotizing Fasciitis?

A type of infection that is caused by flesh-eating bacteria, necrotizing fasciitis (NF) can be fatal. It is more commonly known as flesh-eating disease and can cause soft tissues of the affected body part to die. The disease can turn extremely severe if not brought under control, immediately.  The infection spreads rapidly and causes the affected area to look like it is wearing away.  Immediate symptoms are usually not recognisable but later the affected area of the skin starts to look red or purple. It also accompanies severe pain, fever, and vomiting. Usually, the disease is caused because Group A strep has already entered into a wound after an injury or surgery. A prick, blister or a small cut is enough for the bacteria to enter. The bacteria then starts destroying skin, fat and muscle at a rapid rate and eventually enters the bloodstream.

Last month, reports had it that a flesh-eating bacteria, vibrio latched onto people who ventured out or swam in water bodies like lakes and oceans. The bacteria are growing and the cause is unknown. This bacteria can lead to Necrotizing Fasciitis, in rare cases.

(The above story first appeared on LatestLY on Sep 23, 2019 03:07 PM IST. For more news and updates on politics, world, sports, entertainment and lifestyle, log on to our website latestly.com).