Eddie Hall who is an English former professional strongman, known for winning the World's strongest man 2017 competition. He also created the record in the year 2016 for doing heaviest deadlift where he lifted 500 kg under strongman rules. As a teenager, he was a successful swimmer and rugby union player. Meanwhile, he is in the news for losing 6st weight which is equivalent to 38.1 kg. 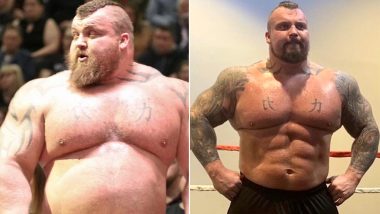 Eddie Hall who is a former English professional strongman known for winning the World's Strongest Man 2017 competition. He also created the record in the year 2016 for performing the heaviest deadlift of 500kgs.  As a teenager, he was a successful swimmer and rugby union player. He is now in the news for losing six stones (38.kg). Although the current holder of the Strongest Man title is Hafthor Bjornsson from Iceland, who played the Mountain in The Game of Thrones, Hall was the title winner in 2017 and didn't defend his title. His massive frame is obviously maintained by rigorous workout and a strict diet. Can you stomach it? World's Strongest Man 2018: Game of Thrones' 'The Mountain' Hafthor Bjornsson Wins.

196kg vs 164kg 2017 Vs 2018 Lots of people asking for comparison photos from my biggest to now, well here it is.... #transformation #backupyourbull #sinkorswim #beast Big Love The Beast

Eddie wanted to lose extra kilos from his body, therefore most of his training revolved around boxing, swimming and cardio exercises. He also included High-Intensity-Interval-Training in his programme for fat loss. Eddie Hall workout for almost three to four hours in the gym to achieve an aesthetic body.

370lbs... Must admit Iv pilled the weight back on the last few weeks from traveling and barely training! Still keeping on top of things when I can with a few 3-4 hour sessions when I can and blasting the Oblivion product from @myoband 👈 in my diet 2-3 times a day. Cannot wait to get home mid July and get back to some hard training again. 💪 #BackUpYourBullshit Big Love The Beast

17 day fat loss challenge comes to an end.... Watch it on my YouTube channel’ link in BIO!!!! I lost 20lbs in total but regardless of my weigh in I gauged my success by the mirror and the results by eye. I exercised for 3+ hours every day, I used Oblivion from @myoband to maintain high protein intake to keep my muscle mass on, I used @prepkitchenuk meals to get decent nutrition on point and kept the carbs down, I slept 8 hours a night and drank 7 litres of water a day with plenty of fruit and veg!! #BackUpYourBullshit Big Love The Beast

Eddie Hall has completely cut down on carbs and he is basically on an all-protein diet. In this, it was also a challenge for him to cut down on calories, reduce fat and maintain healthy muscle mass. His diet like all other all protein diet include foods like meat, fish, dairy products, legumes, eggs and vegetables that are relatively rich in protein, such as asparagus and spinach.

Eddie Hall has now developed six pack abs and he is indeed living this moment. He wishes to reduce more weight and let his abs be visible till his age reach the late forties or fifties. Eddie Hall has retired from powerlifting competition as he is proud to retire with the record of doing 50O kg deadlift.  One thing which is most important for weight loss is your positive attitude. You become, what you think, therefore if you want to lose weight, put all your thoughts and focus into that.

(The above story first appeared on LatestLY on Jul 16, 2019 09:00 AM IST. For more news and updates on politics, world, sports, entertainment and lifestyle, log on to our website latestly.com).