Bjornsson has been competing in the event since 2011 and it was his dream to win the competition. 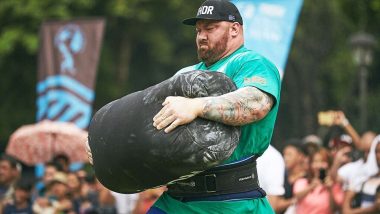 Hafthor Bjornsson who plays Gregor 'The Mountain' Clegane in TV series Games of Thrones has won the World's Strongest Man competition. The man who stands at 206cm weighs a whopping 200kg had finished as runner-up the past two years. He came second thrice and third another three times over the years but had not won. Bjornsson has been competing in the event since 2011 and it was his dream to win the competition.

The 29-year-old won the WSM crown in the Philippines on Sunday. The former basketball player took to Instagram to thank his "family, friends and fans" for their continued support. Second place went to Poland's Mateusz Kieliszkowski, 6.5 points behind Bjornsson and Brian Shaw of the United States came third. Last year the title was won by Great Britain's Eddie Hall, who didn't compete this year. He handed over his title to Bjornsson following his shock retirement for health reasons.

LOOK: The Bus Pull kicked off the last day of The @WorldsStrongest Man at the Diliman campus of the University of the Philippines! Two more events remain to determine who will win the title! #WSM #itsmorefuninthephilippines pic.twitter.com/lUr9esnHLb

The competition was a two-day event which included the vehicle deadlift, max overhead and loading race. The competition which is held over several days has many strength events in qualifying rounds and before the finals. Bjornsson won the Loading Race and Overhead Press in the finals. In the Loading Race, participants took heavy objects, each weighing 100 to 163 kg, onto the back of a truck. In an event called Atlas Stones, they had to lift heavy stones to a platform.

LOOK: Behemoths of @WorldsStrongest show off their strength and speed at the University of the Philippines. For the Loading Race event, each strongman needs to carry an anchor, a safe, a 330 lbs dack and a 250 lbs keg in a race to the finish line! #WSM #ItsmorefuninthePhilippines pic.twitter.com/2jahyN9o0v

He took to Instagram thanking fans, friends and family for the win:

THE WORLD’S STRONGEST MAN 2018! 🥇🙏 . . Want to thank all of my family, friends and fans for supporting me along the way. . Special thanks to my coach @australianstrengthcoach and my nutritionist @stanefferding . . Also want to thank my sponsors, @kjotkompani @sbdapparel @roguefitness . . Congratulations to @kieliszkowskimateusz and @shawstrength for their second and third finishes! . #numberone

Watch video of the event here:

Bjornsson has also dominated Iceland's Strongest Man competition since 2011. The country is regarded as the historical home of the world's most powerful athletes, and Bjornsson is the first Icelander to win WSM since Magnus Ver Magnusson in 1996.

(The above story first appeared on LatestLY on May 08, 2018 04:04 PM IST. For more news and updates on politics, world, sports, entertainment and lifestyle, log on to our website latestly.com).