Kendall Jenner and Emily Ratajkowski Sued! Models in Legal Trouble After Fyre Festival Claims Their $275,000 Back

This is not the first time Kendall Jenner has been in trouble. Although the entire family gets in trouble for something or the other, Kendall definitely gets in the stickiest situations. We all remember the Pepsi commercial and how it changed things for her online. Other celebrities involved were paid way more than Jenner. 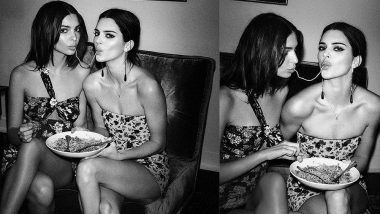 Kendall Jenner and Emily Ratajkowski are in legal trouble over their deleted Instagram posts. After the infamous Fyre Festival, celebrities are now being sued for not promoting it after being paid nearly a million dollars for advertisement. The significant names to come out in this are supermodels Kendall Jenner and Emily Ratajkowski, Migos, Pusha T, Tyga, Desiigner, Rae Sremmurd, Lil Yatchy and well-loved Blink-182. The festival was supposed to be a dreamy, tropical vacation in the Bahamas, packed with celebrities and influencers. However, it turned out to be a major disappointment for ticket buyers. Blow Job Memes Go Viral After FYRE Festival’s Andy King Confesses to Performing Oral Sex For Bottled Water in Netflix Documentary.

Gregory Messer is the federal trustee who is overseeing Fyre's bankruptcy. After the failure and ruin, he's suing a list of celebrities that received handsome money for advertisement and campaigning of the festival on Instagram. After all this time, the drama continues. They're now suing influencers who were paid for promotions but backed out. Kendall Jenner was paid $275,000 to promote the music festival in an Instagram post which has now been deleted. Model pal, Emily Ratajkowski’s agency was paid $299,000. Emily Ratajkowski Pregnant? Model Sparks Rumours with New Instagram Post with Husband Calling Them 'Mom and Dad'.

In March 2019, The Keeping Up with the Kardashians star talked about issue with Amy Chozick for The New York Times and said, “You get reached out to by people to, whether it be to promote or help or whatever, and you never know how these things are going to turn out, sometimes it’s a risk. I definitely do as much research as I can, but sometimes there isn’t much research you can do because it’s a starting brand and you kind of have to have faith in it and hope it will work out the way people say it will. You never really know what’s going to happen.”

This is not the first time Kendall Jenner has been in trouble. Although the entire family gets in trouble for something or the other, Kendall definitely gets in the stickiest situations. We all remember the Pepsi commercial and how it changed things for her online. Other celebs involved were paid way more than Jenner. Creative Artists Agency received $500,000 for Blink-182. And a whopping $730,000 was given to Nue Agency for Tyga, Pusha T and Desiigner.

(The above story first appeared on LatestLY on Sep 01, 2019 08:52 AM IST. For more news and updates on politics, world, sports, entertainment and lifestyle, log on to our website latestly.com).