Meet the Gnarl3yBoyz: Trio of Rappers Rising to the Top in Art and Entrepreneurship

The passion of an artist and the willpower of a businessman are two unparalleled forces. The Gnarl3yBoyz, a rap trio from Charlotte have merged the two, building their own business to fuel their music career and share in the opportunity of a new way to earn income with creators all over the world. 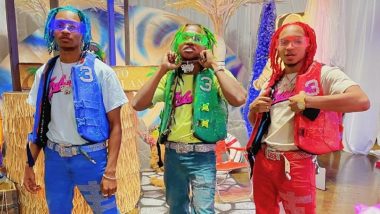 The passion of an artist and the willpower of a businessman are two unparalleled forces. The Gnarl3yBoyz, a rap trio from Charlotte have merged the two, building their own business to fuel their music career and share in the opportunity of a new way to earn income with creators all over the world. The Gnarl3yBoyz, were in the pursuit of freedom - financially and creatively - and today, they’ve created not only a company, but a lifestyle that surely proves that you can have both...and more.

The Gnarl3yBoyz, are a rap group consisting of three brothers: Kamrie, Lev and Darius Herbert, who go by their artist names, Dash, Jawara and Jelani, respectively. Growing up musically inclined, with a love of the arts and the desire for the freedom of entrepreneurship, Jelani and Dash both attended College, Jelani studying theater to learn to direct and write screenplays, while Dash studied business. Despite studying completely different subjects, both came to the same conclusion: the life they wanted lay outside of what a post-secondary education could provide, and they both ended up following in Jawara’s footsteps in the school of life, learning through experience and self-teaching rather than formal education.

“I didn’t finish college because I didn't feel like I was learning anything new. It felt like I was spending a lot of money and not really gaining anything from it. So I decided to focus more on pursuing my dreams like Dash and Jawara, learning as we go,” says Jelani.

Seeing their father thriving in entrepreneurship with his own drink business called Inca Logica, while simultaneously working as a manager in corporate America, made the boys realize that pursuing their passion for music while owning their own business was not only possible but necessary to achieve their music aspirations more efficiently. Using their business to finance their passion was the key - they already had the collective vision, the right work ethic, and a strong business acumen...they just needed the right opportunity.

That opportunity presented itself in 2019, while the boys were in LA. They ran into an old friend who introduced them to the concept of network marketing. The boys were already trading in the financial markets while pursuing their music and they knew this was the perfect way to merge their skillsets of trading with a business model that could also be used as a platform to educate other creators on the opportunities for financial independence available to them. The boys ran with it and created their business called “Gnarl3y Surf Club”, a play off of the name and concept behind their musical group.

When discussing the concept of their business, Dash says:

“Gnarl3y Surf Club ties into the idea behind our entire brand. We want everyone to have the mindset like a surfer in the middle of the ocean - they’re surrounded by nothing but trees, birds and waves - they’re at complete peace and that’s what financial freedom should feel like. We’re helping people get to that level of financial independence by showing them a new way to look at income, a new mindset of growth and progress, and a new level of confidence in themselves and in their ability to be their own boss.”

For the Gnarl3yBoyz, the most valuable aspect of their business is in their ability to utilize their earnings from the Gnarl3y Surf Club, to invest in their music career - and they knew this would benefit other artistically inclined individuals who struggle with finances while pursuing their passions.

“As artists, we want to bring like-minded individuals together who are looking for another way to earn income to invest into their career - creators like clothing designers, dancers, bloggers, artists, rappers, singers, whatever your creative talent may be, we’re helping them gain the financial means to fund and make a career out of those talents,” says Jawara.

To date, Gnarl3y Surf Club contains over 200 individuals and counting, based out of Charlotte and Los Angeles. Reaching this level of success was not achieved without setbacks that the Gnarl3yBoyz, have since grown and learned from.

When discussing the most difficult leg of their journey, that also turned out to be their most pivotal moment, Dash says:

“In 2019, before we were introduced to this business, we moved to LA to follow our music career and met somebody who we ended up signing a deal with. We were also living with them at the time, but we realized when the deal fell through that his intentions were not genuine so we moved out and ended up living in our car for four months. That was a turning point for all of us. We had to step our game up and work as a team to get out of that tough situation. Even while we were working to keep our heads afloat, we were still chasing deals, going to events looking fresh - nobody knew what was really going on. And while we were putting in all that work, our music was growing. They call it the belly of the beast in LA, but we didn't get swallowed up, it just made us stronger and in the end, we were able to close a distribution deal.”

As entrepreneurs leading by example in the creative and professional realms, the Gnarl3y Surf Club is creating the financial means to grow Dash, Jelani and Jawara’s music career to unimaginable heights. Seeing the literal rags to riches scenario they endured, strengthened their faith in a higher power and just demonstrates that the Gnarl3yBoyz lifestyle - constantly moving, keeping good energy flowing until you find the wave that will bring you where you need to go - is what we all should embody when searching for peace in our journey. The Gnarl3yBoyz leave us with a reminder to help us ‘keep on keeping on’:

“Keep positive energy flowing because everything is energy - just keep moving, keep pushing. Nothing's going to come easy for sure. There will always be something trying to knock you down, off your surfboard. But you have your vision, stay on that path and you’ll make it.”