The Miss Universe 2019 will also see the notable Indian model, Vartika Singh represents our country. The 26-year-old has already turned heads with her work in the industry and was also ranked amongst the hottest Indian women by GQ magazine in 2017. 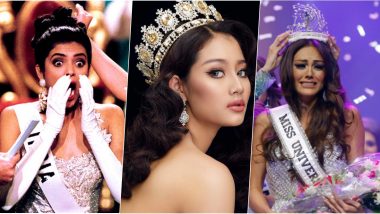 In 1994 pageant, Sushmita Sen became the first Indian woman to be crowned Miss Universe. Recently, during 2016 Miss Universe where the winner, Miss Puerto Rico - Kristhielee Caride was dethroned. There have been various historic and unforgettable moments in the Miss Universe Competition over the years. Here is a look at some of the most special ones.

We all remember this moment, whether you were there to witness it or merely saw videos of the whole thing over the years, but 1994 was an eventful year for India at Beauty pageants! When Sushmita Sen bagged the Miss Universe pageant in the year, she not only etched history but also won all our hearts with her brilliant answers in the final Q&A round. What’s more, she continues to live on to her promise of helping others, being a phenomenal mother and an overall superhuman! Miss Universe 2019: Ahead of Vartika Singh’s Participation in the 68th Edition, Here’s a Look at Sushmita Sen and Lara Dutta’s Crowning Moment (Watch Videos).

This rather less-spoken event stands out for various reasons. When the Miss Universe 2013 contestants were asked to flaunt their country’s signature elements in the Parade of National Costumes, they went all out. However, Miss USA 2013, Erin Brady, twisted this parade when she walked the ramp all decked up in a full-fledged Transformers Costume!

This incident needs no introduction, as the memes and jokes are still afresh in our minds. Back in 2015, the Miss Universe host, Steve Harvey pulled up quite a fiasco, when he announced the wrong name, owing to an envelope mix-up. Miss Colombia Ariadna Gutierrez was crowned the Miss Universe 2015, for a complete 2 minutes, before the blunder was recognised, and what followed was a rather awkward moment in the Miss Universe history. A teary-eyed Miss Colombia had to take off her crown and give it to the actual winner - Miss Philippines Pia Alonzo Wurtzbach. While this brought the Miss Universe 2015 to quite an awkward end, it did give us some hilarious jokes in the next year’s edition!

The past few years have been quite eventful for the Miss Universe Pageant. In 2016, Miss Puerto Rico 2016, Kristhielee Caride, was stripped of her title months after being crowned. According to the Miss Universe terms, the winner has to indulge in some media interactions, use specified stylists, salons, etc. However, Kristhielee Caride failed to follow these terms, and the authorities clarified that she did not keep up her media appearances as she “Did Not Like the Cameras.”

While the 2019 edition of Miss Universe is still on its last lap, it has already created quite some buzz. This year’s pageant will see the first openly gay contestant in the Miss Universe history, and it is none other than Miss Myanmar, Swe Zin Htet. The 21-year-old actress-singer-model came out of the closet on a beauty blog just a few weeks ago and will be the first member of the LGBTQ community at the pageant. Who Is Swe Zin Htet? Meet Miss Universe’s First Openly Gay Contestant Participating at the 68th Beauty Pageant, View Hot and Glamorous Pics of the Myanmar Girl.

The Miss Universe 2019 will also see the notable Indian model, Vartika Singh represents our country. The 26-year-old has already turned heads with her work in the industry and was also ranked amongst the hottest Indian women by GQ magazine in 2017. While we wait to see if Miss India can bring the crown home, there is no questioning the fact that the Miss Universe 2019 pageant has already been quite a monumental event!

(The above story first appeared on LatestLY on Dec 09, 2019 05:00 AM IST. For more news and updates on politics, world, sports, entertainment and lifestyle, log on to our website latestly.com).