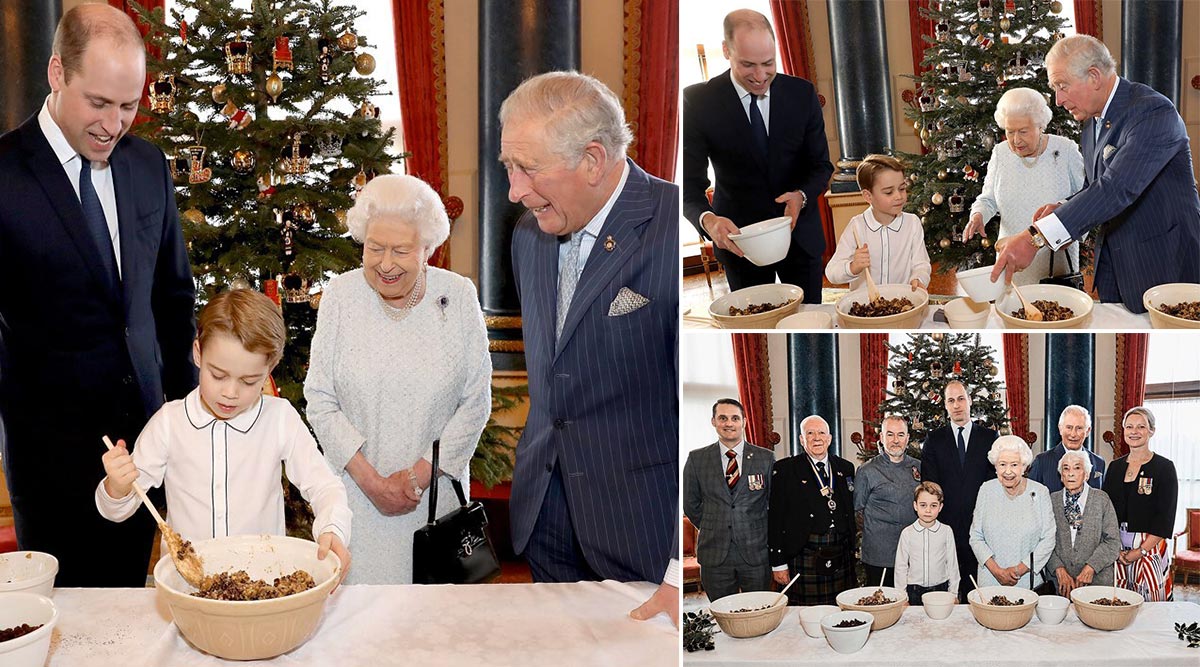 Prince George is celebrating the holiday season with father Prince William, grandfather Prince Charles and great-grandmother Queen Elizabeth II. Kensington Palace took to social media sharing pictures of the little prince mixing pudding standing in front of a Christmas tree as his family happily looks on. They posted the photos on Instagram with the caption, "Four generations of the Royal Family together at Christmas." Prince George Celebrates His 6th Birthday: Kensington Palace Shares Adorable New Pictures of His Royal Highness Clicked by Duchess of Cambridge Kate Middleton.

The Instagram post further reads, "The four generations of the Royal Family are pictured here preparing special Christmas puddings — with the four representing a cross-section of those supported by the Legion, from the children of service personnel, to Second World War veterans." The Queen wore a pale blue dress while William was decked in a black suit and Charles in a blue pinstriped one. Princess Charlotte’s First Day at School! Kensington Palace Shares Adorable Video of the Royal Tot Arriving at School With Kate Middleton, Prince William and George.

Four generations of the Royal Family 🎄 together at Christmas. New photos of The Queen, The Prince of Wales, The Duke of Cambridge and Prince George have been released as part of the launch of the @RoyalBritishLegion’s ‘Together at Christmas’ initiative. The initiative is designed to provide extra support to the Armed Forces and veteran communities at annual festive ‘get togethers’ across the charity’s network of outreach centres. The four generations of the Royal Family are pictured here preparing special Christmas puddings — with the four representing a cross-section of those supported by the Legion, from the children of service personnel, to Second World War veterans. The puddings will become the centrepieces of 2020’s get togethers, and form part of 99 puddings distributed across the charity’s network in the UK and the Commonwealth - also marking The Royal British Legion’s 99th year. Photos 📷 by @chrisjacksongetty

The family members came together to prepare four special Christmas puddings which are traditionally believed to bring good luck. The desserts will be centrepieces at the Legion Christmas get-togethers in 2020. It will be a part of their new 'Together at Christmas' initiative that tries to provide extra support to the Armed Forces community during the holidays.

The pudding making session is believed to have taken place ahead of Queen Elizabeth's annual Christmas lunch at Buckingham Palace that takes place before she leaves her London home for Sandringham to spend the holiday. It seems that Prince George is taking baking lessons from mother Duchess of Cambridge, Kate Middleton who reportedly makes cakes from scratch for her children's birthdays. Earlier Kensington Palace had shared pictures of Kate Middleton and Prince William helping charitable organisations with Christmas preparations.