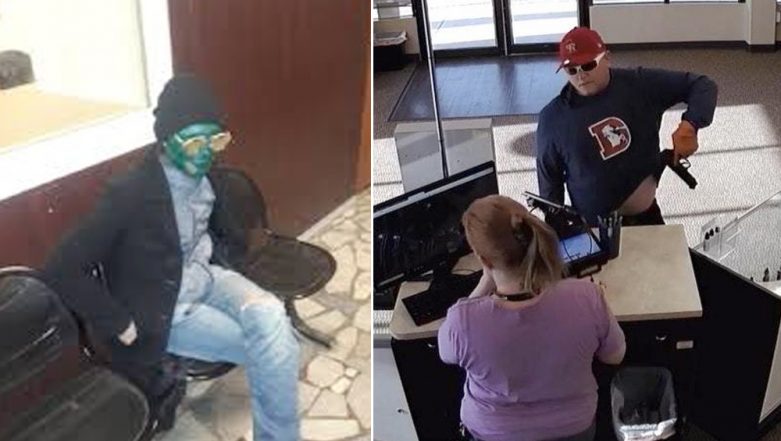 The depiction of robbery in movies has raised the bar of how one should take place in our minds. Be it a bank, museums, shops or highly confidential government departments, the perfect crime scenes are too thrilling to watch. But it does not seem everyday criminals are so efficient and may in fact leave you laughing watching their attempts. Videos of clumsy thieves trying their best to get a thing out of a store may make you wonder if they are even fit for the job.

Earlier this week, two Texas burglars had to return a flat TV they stole from a Dallas house because it couldn't fit in their stolen car. Videos of many such poor attempts have gone viral much to the amuse of social media users. Most of the time, in these cases, their incompetency landed them in jails. We have compiled 7 such funny robbery attempts that will make you see only if these guys hadn't attempted that theft.

1. The funniest thief ever

A man entered a Colorado e-cigarette store unsuspiciously and aimed a gun at a woman. But his 'toy gun' falls off his hand and when he tries to jump over the glass table, his pants drop down. Within seconds of his failed robbery attempt, he runs out of the store trying to get his pants back in place. The hilarious video has gone massively viral on social media with people laughing at it inefficiency.

A group of armed thieves gained the name 'worst robbers in Belgium' after a foolishly failed robbery attempt at an e-cigarette shop. The shop owner tricked them by asking to return when he had more money in the register. And guess what? Six of them returned not once but twice hoping to get some free money. When they first returned, the shop owner sent them away asking to return when the shop was closing. The shopkeeper was now convinced that the guy would return again so he informed the cops. The next time they arrived, the robbers were taken down by police waiting to arrest them.

3. Most Clumsy Thief Ever

A thief was outwitted by the keeper of a gold store from where he tried to steal a gold chain. The clumsy criminal entered a jewellery shop in Chonburi, Thailand and asked for a gold chain. He pretended to admire the chain after wearing it. After a few moments, he ran to the door only to find it locked. With no way out, the thief had to return the chain. He was eventually handed over to the police.

4. One Thief Knocks Off Other Accidentally

The video caught on a CCTV footage in Shanghai had gone viral on social media last year. The incompetent burglars tried to break open something but failed terribly. The video shows one of them throwing a brick to open something, when he fails, his partner attempts. But the brick ends upon his friend who falls to the ground holding his head. Realising what he had just done, the man then drags his injured partner out of the crime scene.

A man and a woman entered a Reddi Mart west of Edmonton and tried using their stolen credit cards. The shop owners grew suspicious seeing them hanging around their store for hours. They informed the cops who arrived and tried to arrest the man who pushed the woman on top of the officer. The man then ran inside the store giving the cop a tough time. Meanwhile, the woman went inside the store and climbed on top of a shelf, only to fall down into the middle of the store. The duo was eventually arrested by the police.

A thief in Russian painted his face in green colour to hide his identity, only helping the police to find him easily. He stole a woman's purse a local train station and before he would escape, the cops had nabbed him, thanks to his peculiar looks.

A robbery at a gold jewellery store in Canada run by Indians was averted by owners of the store themselves. A video shows burglars breaking the glass wall of the store only with a hammer. As one of them try to enter, three men from inside the store can be seen running towards the robbers with swords. They wave the sword in air scaring the thieves who eventually give up and run away.

With an increasing number of crimes, it seems that shop owners are becoming aware of how to deal with such situations. In most of the cases, owners acted on time ushering in cops thwarting robberies. With some of them simply trying their luck at robbing, they were easy to be trapped. Do let us know what you think about the videos in the comments section below.