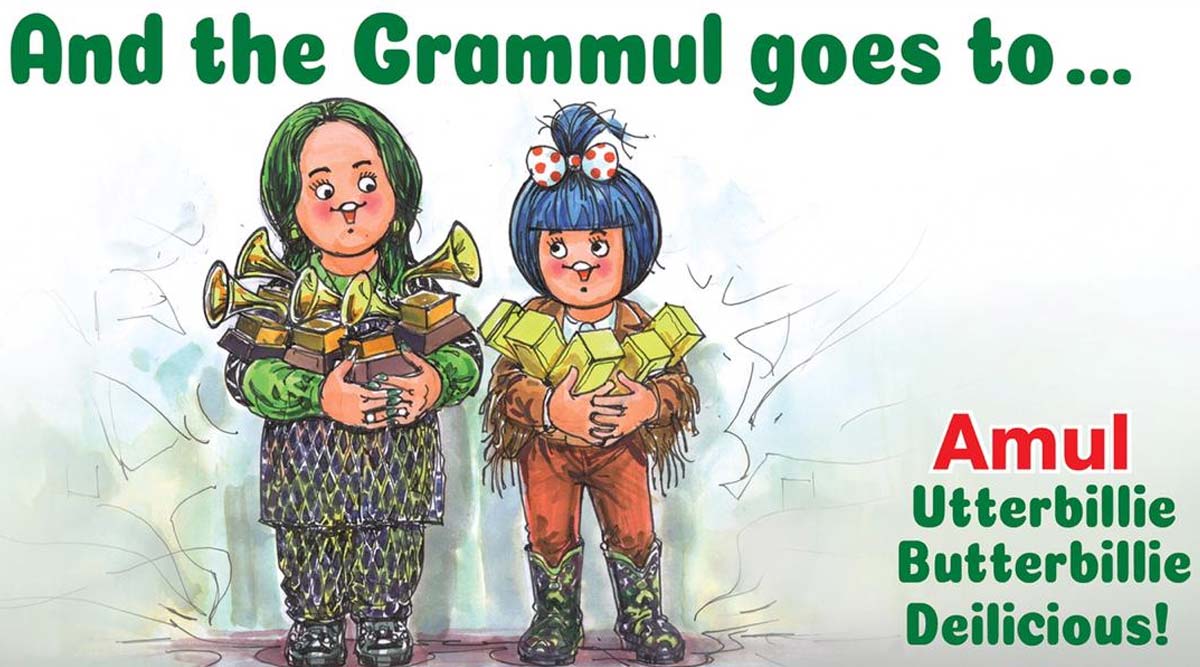 The 62nd Grammy Awards were held on Sunday night (January 26, 2020). The 18-year-old singer, Billie Eilish, dominated the award show, winning five major categories. Fans are going crazy, and so is the teen sensation. After all, it was a big night for her. Billie was the first-time Grammy nominee, and she secured five awards including the record of the year, an album of the year, the song of the year, best new artist and best pop vocal album. Congratulating the singer on her remarkable feat, Indian dairy brand, Amul created a beautiful topical ad, featuring Billie holding the five Grammys trophies. Standing next to her was the Amul girl with cubes of butter. Billie Eilish: All You Need to Know About the Bad Guy Singer Who Made History At Grammys 2020.

The topical ad features the doodle image of Billie with her distinguished green hair and baggy clothes, happily holding the trophies, standing next to the Amul girl. The topical reads, “And the Grammul goes to…” with the famous slogan of the brand that was turned into, “Utterbillie Butterbillie deilicious!” for the special honour. Here's the Billie Eilish Track That Bagged Song Of The Year Honour at 62nd Annual Grammy Awards.

Billie, won for her debut studio album, “When We All Fall Asleep, Where Do We Go?” while her hit single Bad Guy was named record and song of the year. The 18-year-old is only the second person and the youngest to win all four top Grammys on the same night. Amul captioned the topical, “Billie Eilish, 18, the youngest winner of all four major Grammy categories, wins five!”

The 2020 Grammy Awards was filled with emotions and happiness at the same time. The show began with the tributes to Los Angeles icons. The night honoured the lives and legacies of NBA legend Kobe Bryant and rapper Nipsey Hussle, who won his first Grammy posthumously on Sunday’s show. Apart from Billie, a mix of newcomers and well-known acts won their first-ever Grammy Awards, including Tanya Tucker, J. Cole, Lil Nas X and Billy Ray Cyrus.