Beirut Explosion: Lebanese Volunteers Search and Reunite Lost Pets With Their Owners Following the Deadly Blast, Videos of Reunion Will Melt Your Heart

From rescuing pets, to treating them and finally reuniting the animals with their owners, the animal welfare organisation is doing everything possible for the reunion. Videos of the emotional moment of pets being united with their hoomans, have gone viral on social media, melting hearts of netizens. 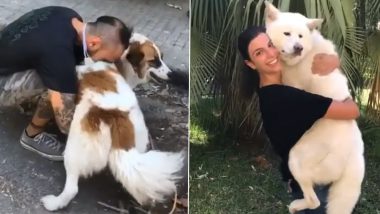 A massive explosion rocked the Lebanese capital of Beirut on Tuesday evening, August 4, 2020. According to reports, the blast left at least 135 people dead and thousands injured. While the country is reeling from the explosion, many videos and photos have begun surfacing on the internet that show how horrific aftermath scene of the blast. Along with many rescue operations, people in Lebanon are being reunited with their pets in Beirut. Thanks to the non-profit group, Animals Lebanon’s and its brave volunteers. From rescuing pets, to treating them and finally reuniting the animals with their owners, the animal welfare organisation is doing everything possible for the reunion. Videos of the emotional moment of pets being united with their hoomans, have gone viral on social media, melting hearts of netizens. Grandmother Plays ‘Auld Lang Syne’ Song on a Piano Surrounded by Debris from Beirut Explosion, Heart-Warming Viral Video Shows Preserving Spirit Amid Despair.

One video shows a dog, waiting on a lead with a volunteer, before joyfully wagging its tail when two men, who appear to be the dog’s owners, walk through the door. More footage shows three separate humans and their pets being greeted each other, including one who is lifted in the air and happily cuddled by a delighted woman. It is not clear as to how many animals were injured or separated from their owners during their blasts, but the city residents are reportedly posting their search on social media in an effort to find their lost pets. The Simpsons Predicted Beirut Explosion As Well? Netizens Find Similarities Between American Sitcom's Episode of Homer Exploding Springfield and Lebanon Disaster.

A lovely bit of light in the darkness - a man being reunited with his dog after the Beirut explosion. Thanks to @AnimalsLebanon for sending this to me, and your incredible work reuniting people with their lost pets. https://t.co/TA757aXRla

The 12-year-old organisation was quoted in media reports saying that they have found owners of about 20 dogs and cats so far. The blast damaged the organisation’s office, leaving several cats in the centre injured with broken glass from its windows.

More Footage of Pets Being Reunited With Owners:

“We’ve been contacted a couple of hundred times so far since last night, we are the main animal welfare organisation in the country. So far today we have had more than 40 people out, working in teams of two or three, and that has been ongoing since 8pm last night. The goal is to keep going, I know we’re doing good stuff, I know we’re making people happy, but it’s overwhelming for everybody,” Animals Lebanon’s executive director Jason Mier was quoted as saying in Metro. Lebanon Bride, Whose Wedding Photoshoot Was Interrupted by Massive Explosion in Beirut, Says 'Lucky to be Alive' After Dramatic Video Goes Viral.

The explosion in Beirut has been linked to a large supply of confiscated and potentially unsecured explosive material, stored in a warehouse at the city’s port, which is close to populated areas. Local officials are launching an investigation into the blast. The search and rescue operations are on, and the government has declared a two-week state of emergency in Beirut.

(The above story first appeared on LatestLY on Aug 06, 2020 09:07 PM IST. For more news and updates on politics, world, sports, entertainment and lifestyle, log on to our website latestly.com).