A video of an older woman, playing her piano surrounded by rubble in her home. Her granddaughter posted the video on Facebook first that shows her grandmother playing the classic song, “Auld Lang Syne.” The video going viral display the preserving spirit of the Lebanese people amid all the despair. 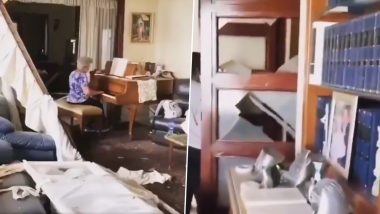 The world is still reeling from the explosion that levelled part of Beirut on August 4, 2020. According to media reports, the death toll rose to 135, and about 5,000 people are left wounded in the capital of Lebanon. Since the unfortunate incident took place, many videos and photos have emerged on social media from around the Lebanese capital showing the moment of the blast, and aftermath destructions from the phones of people who somehow survived the blast. Among the clips was the video of an older woman, playing her piano surrounded by rubble in her home. Her granddaughter posted the video on Facebook first that shows her grandmother playing the classic song, “Auld Lang Syne.” The video going viral display the preserving spirit of the Lebanese people amid all the despair. Lebanon's Deadly Beirut Blast: Video of Father Doing his 'Absolute Best' to Protect His Son After Their House Shudders Due to the Massive Explosion Will Break Your Heart.

Chaos will be an understatement if we are to describe the scene in this house in Beirut. Furniture was strewn about, the walls punctured with holes, glass and debris, all over the floor. But for a few minutes, the world just paused, and everything seemed peaceful when 79-year-old, May Abboud Melki, played the song, “Auld Lang Syne,” which translated in English means, “old long since,” on her piano, which seemed left unharmed. It was just so peaceful, displaying the strong sentiment of the Lebanese people, right now as they continue to reel from the explosion. Burj Khalifa And Egypt's Giza Pyramids Lights Up in Colours of Lebanon Flag in Solidarity With Victims.

As the video went viral, Melki’s granddaughter, reported to CNN that it was not the first time that her grandmother saw such a devastating explosion. “It survived the entire civil war. It witnessed bullets go through it. They have rebuilt themselves over and over again,” granddaughter May-Lee Melki was quoted saying in the report.

The video shows the persevering spirit of the Lebanese people. The explosion in the Lebanese capital tore through the city, wiping out streets and damaging buildings. The exact cause of the blast as informed by the Prime Minister, Hassan Diab, was linked to a warehouse storing thousands of tonnes of an unsecured explosive material called ammonium nitrate. The government has declared a two-week state of emergency in Beirut.

(The above story first appeared on LatestLY on Aug 06, 2020 03:20 PM IST. For more news and updates on politics, world, sports, entertainment and lifestyle, log on to our website latestly.com).