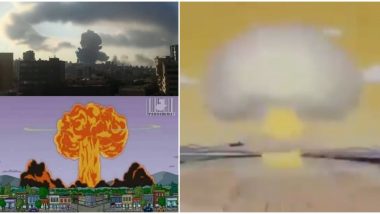 At this point in 2020, we really need to watch The Simpsons reruns to see what crises await us further. The American sitcom is known for predicting things into the future and most of them have stood true for this year. Right from Coronavirus outbreak to the White House Lights out episode, there have been similar instances shown in this animated series. Now it has come to notice, that the show also featured an episode that's similar to the Beirut explosion in Lebanon. The devastating explosion that rocked the Lebanon capital on August 4 is reminding people to an episode where Homer Simpsons exploded an entire town of Springfield. Netizens are calling it that The Simpsons also predicted the Beirut explosion. Some of them have even found the similarity from The Simpsons movie! Did The Simpsons Predict Crude Oil Prices to Turn Negative? 6 Times When the American Animated Sitcom’s Predictions Came True.

The American sitcom has been too accurate with what is showcased and how things are turning out this year. Right after the outbreak of Coronavirus, an episode from 1993 went viral for showing something called an "Osaka flu". Various other episodes have also been found to be similar to what is happening in the world right now. After devastating explosions rocked Beirut claiming over 135 lives and over lakhs homeless, netizens were quick to find a Simpsons episode that had something similar. They found not one but two such episodes, one from the sitcom and another from the movie. People have taken to Twitter to share videos and pics commenting how Simpsons have done it again.

They are noy an animation they are future teller's.

Scene From The Simpsons Movie

Watch Video of The Episode Here:

Well, what happened in Beirut is indeed unfortunate. Over 135 people have lost their lives and 5,000 injured. It is indeed bewildering how the scene from the show and pics from the movie look so exactly similar to what happened in Lebanon. The scene has shown in the movie too and people cannot unsee it. What do you think?

(The above story first appeared on LatestLY on Aug 06, 2020 11:09 AM IST. For more news and updates on politics, world, sports, entertainment and lifestyle, log on to our website latestly.com).