To highlight the plight of people and to point out how dear petrol has become, organisers of a cricket tournament in Madhya Pradesh's Bhopal adopted a unique way. 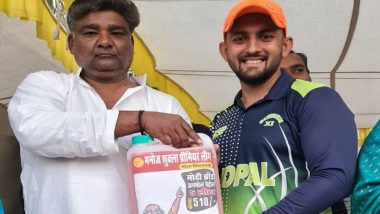 Bhopal, March 2: Prices of petrol and diesel are increasing across the country almost everyday since past one month. The rising fuel price is burning a hole in citizens' pockets. To highlight the plight of people and to point out how dear petrol has become, organisers of a cricket tournament in Madhya Pradesh's Bhopal adopted a unique way. They gave petrol as gift. Petrol Pump Employee Injured as Miscreants Open Fire to Loot Money.

The organisers awarded 5 litres of petrol to a cricketer who was adjudged the best player in the final match of the cricket tournament. The tournament was organised in Bhopal by Congress leader Manoj Shukla, reports said. In the final match, which was played on February 28, a cricketer named Salauddin Abbasi won the Man of the Match award. He was then awarded 5 litres of petrol. Fuel Price Hike: Tamil Nadu Couple Receives Petrol, Gas Cylinder and Onions on Their Wedding, Video Goes Viral.

Meanwhile, the rise in the petrol and diesel price has paused for the last couple of days. The prices remained today too. Consequently, petrol continues to be priced at Rs 91.17 a litre and diesel Rs 81.47 a litre in Delhi. In all other metros, petrol is sold for more than Rs 90 a litre, while diesel is well over Rs 80 a litre. In Mumbai, petrol price is just Rs 2.4 per litre short (Rs 97.57 a litre) of touching Rs 100 per litre.

Petrol and diesel prices have been rising continuously since February 9. In the 14 increases since then, prices have gone up by Rs 4.22 per litre for petrol while diesel rate has risen by Rs 4.34 a litre in Delhi. The increase in the previous weeks has taken petrol to cross historic high levels of Rs 100 a litre in several cities across the country.

Premium petrol has crossed Rs 100 per litre-mark in several cities of Rajasthan, Madhya Pradesh and Maharashtra a few days back. Since fuel prices are benchmarked to a 15-day rolling average of global refined products' prices and dollar exchange rate, pump prices can be expected to remain northbound over the next few days even if crude price stabilises.

(The above story first appeared on LatestLY on Mar 02, 2021 11:31 AM IST. For more news and updates on politics, world, sports, entertainment and lifestyle, log on to our website latestly.com).