The perfection of Johannes artforms is highly commendable. 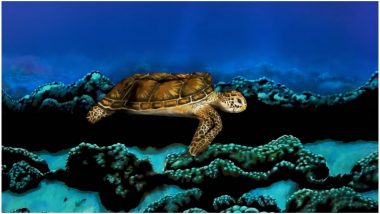 Body painting artist Johannes Stötter from South Tyrolian has baffled people once again with her work. In his latest work, the internationally famous artist transformed model Sara Costabile into a sea turtle! Looking at the video, it is too hard to believe that the turtle is a human being. The video shows a turtle swimming in bright blue sea water near the bed. Johannes is known for transforming models to look like reptiles.

He has also painted models to look like a monkey, dog, parrot, fish, lizard and even a frog. The perfection of Johannes' artforms is highly commendable. Her life-like animal forms can easily be passed off as the real ones. Her Instagram photos even show how she transformed a model into a high red heel. Make-Up Artist Mirjana Kika Milosevic Makes Her Head Disappear in Optical Body Illusion (Watch Spooky Video)

Watch the video below and be stunned:

See the model getting transformed into a turtle:

THE SEA TURTLE by Johannes Stoetter "NOW it is the right time for my sea turtle. It is not only an animal illusion, it's furthermore a symbol for our oceans! #wbproduction #worldbodypainting https://t.co/fbzE1doAqU pic.twitter.com/NXST2t0BRh

In an interview with Italian Shoes, Johannes said that his designs began as simple sketches which he later tried on a person. He was quoted as saying, "The idea just came to me out of the blue. I thought it would be interesting to paint a human body. At the time, I knew nothing about body painting: I had never even heard of it, I had seen no photos, I didn’t know if any special paints existed. Two or three years later, I had the opportunity to try it out, and I instantly knew that I had found my calling. You can read more about the artist here on his official website.

(The above story first appeared on LatestLY on Oct 10, 2018 09:46 AM IST. For more news and updates on politics, world, sports, entertainment and lifestyle, log on to our website latestly.com).