Bus Driver in Chile Allowed a Stray Dog to Ride in Bus Because it Was Cold, Watch Heart-warming Video!

The dog climbed behind a passenger on the bus and the driver thought it belonged to him. But he realised it was a stray. The dog hopped on to a seat and curled up like a good boy. 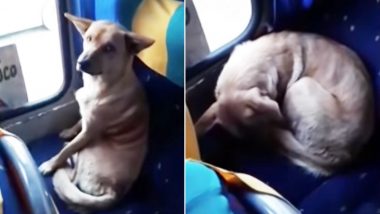 The stray dog hopped on a seat and curled up (Photo credits: Video grab)

A bus driver in Central Chile did an adorable gesture, which will restore faith in humanity. The driver allowed a stray dog to take a ride on the bus as the temperatures outside were really cold. Not all the strays get the necessary care and remain ignored, uncared for. But the bus driver named Christhian had a four-legged passenger in his bus and instead of shooing it away, he let him ride. The driver took a video of the dog happily sitting on the seat and looking out the window. It is an adorable video and will leave a smile on your face, looking at the dog's content expressions. #WhatTheFluffChallenge Viral Videos: Dogs Are Adorably Freaking Out as Owners Play Peek-a-boo!

The bus driver's act of kindness got praise online and the video was widely shared. The dog climbed behind a passenger on the bus and the driver thought it belonged to him. But he realised it was a stray. The dog hopped on to a seat and curled up like a good boy. The bus driver said, "I did not want to take him off the bus because he was so cold. I do not care if people think the seats will get dirty, there are passengers who regularly dirty the seats and throw litter on the floor. However, the dog just sits there and enjoys the ride." Dog Runs Away With a GoPro and The Footage is Going Viral, Watch Video.

Check out the video of the dog getting on the bus:

Doesn't the stray look adorable? He enjoyed his ride too well. The bus driver was an animal lover and he let the dog stay and warm up in the bus. The dog too nicely rested on the seat without causing any trouble to the other passengers. Such videos are examples of the humanity that exists among the people. We need more people like Christhian.

(The above story first appeared on LatestLY on Aug 03, 2018 04:58 PM IST. For more news and updates on politics, world, sports, entertainment and lifestyle, log on to our website latestly.com).