Can Hitting Your Children's Stuffed Toys Convince Them to Eat? Viral Video of This Dad Shows The Correct Way

After videos of parents hitting their children's stuffed toys trying to convince them to eat went viral, a father-of-two took to social media sharing a positive way in which kids can be convinced for the same. 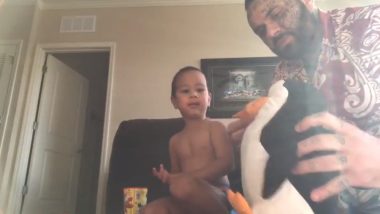 A bizarre social media trend claiming to be a new parenting technique is going viral on social media. Parents are taking to the internet posting videos on wherein they are hitting their children's stuffed toys trying to convince to eat food. The shocking trend became popular after Twitter user Wild Cherry uploaded a video where he is seen beating up his nephew's toy in order to get him to eat food. However, as the video started doing rounds, a father of two sons took to the internet showing how the method can be positively used to convince babies to eat. 'Outnumbered' Father Hilariously Documents Parenting Woes in Epic Instagram Account Every Mom and Dad Should Follow.

The video of the parents hitting soft toys is to inflict fear so that the child doesn't say no to food. As the video went viral, people called it 'disgusting', 'violent' and 'traumatic'.  In the video shared by Wild Cherry, he is seen trying to spoonfeed his nephew to which he replies shaking his head for a 'No'. The man then tries to feed the boy's toy and then proceeds to hit it with his hands. The kid looks at man's act with a terrified look on his face. The man then tries to feed the child and the baby readily eats. The video was viewed over 15 million times on Twitter. Too Much Toothpaste Could Be Dangerous For Children Says CDC; What Are The Side Effects?

When kids don’t wanna eat... this is what you gotta do 🥴😂💀 #imdead pic.twitter.com/DZJri3gCBn

Here is another video:

While some thought it was funny, the video generally garnered a lot of negative reactions. It was Twitter user Christopher Duett found an alternative way to make his two-year-old son Warren eat his food. Criticising the earlier video for inflicting fear into children, Christopher posted a positive way in which kids can be fed. The video shows him trying to feed his son to which he doesn't, he then tries to feed his stuffed toy. The father tries to convince the baby that the toy ate the food, after a few more attempts,  the child eats the food thinking that his toy was also eating. Improve Relationship with Your Child with Digital Storytelling Says Expert.

Hey dumb fuckers using stuffed animals to exhibit negative reinforcement to get your kids to do something, watch this... pic.twitter.com/sLmL5NM5qS

BuzzFeed quoted Christopher as saying, "I couldn't understand why so many people could find such a tactic humorous or acceptable behaviour for a parent to engage in towards a young child." He further says, "The initial videos are problematic because they create the illusion of effectiveness," he said. "But what’s going on behind the scenes of that is that a child of that age is laying the foundation for learning empathy and emotional association and they are observing behaviours and will mimic them." The parenting trend continues to be discussed at length on social media with most saying that it would affect the child's relationship with the parent as it grows up. Most internet users do not seem to support it.

(The above story first appeared on LatestLY on Jun 26, 2019 11:41 AM IST. For more news and updates on politics, world, sports, entertainment and lifestyle, log on to our website latestly.com).