Couple Challenge Funny Memes and Jokes are Here to Stay as Singles Declare the Most Hilarious WAR Against Netizens Sharing PDA #CoupleChallenge Pics! 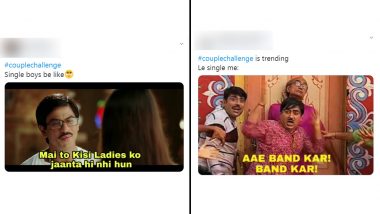 #CoupleChallenge is here to stay! Singles can't stop, won't stop sharing funny memes and jokes about the twitter trend that has people sharing their couple pics laden with PDA. While the trend started off as harmless couple pic sharing activity like it normally does, but singles have now declared a WAR!   #couplechallenge funny memes and jokes by singles is legit everywhere. Twitter is often blessed with some of the best challenges that take-off has a trend in no time with people flooding the microblogging site. Amid the coronavirus pandemic, netizens also have enough time to indulge in online challenges like the #no makeup challenge, saree challenge, #lipstickchallenge etc. and now it's about the #couplechallenge. But it is the funny memes and jokes by singles that take away the cake.

People who are single have declared the most hilarious war against this challenge and we have grabbed a popcorn. Some are also exhibiting their dislike for the challenge by posting hilarious reactions on couple pics like using a crying GIF and most start with "single me after seeing #couplechallenge trend on social media". However, whether singles or not people are enjoying this challenge very much. You might want to check out the funny tweets, memes, jokes and reaction related to the Couple Challenge. Although it is not known who started this challenge and when did all this take over Twitter, the memes and jokes are worth check out! Here are the best  #couplechallenge funny memes and jokes by singles:

My life to me pic.twitter.com/iluZuqmtQm

And the winner is.... pic.twitter.com/Xz9QDRiWv5

We just witnessed the #WeMetonTwitter trend on Twitter with people sharing their stories of meeting their SOs over the microblogging app. And now this #CoupleChallenge is making singles cry out loud. You can check out this set of meme templates if you want to jump into the bandwagon.

(The above story first appeared on LatestLY on Sep 24, 2020 04:20 PM IST. For more news and updates on politics, world, sports, entertainment and lifestyle, log on to our website latestly.com).