The viral post that is being widely circulated on social media platforms including Facebook, Twitter, WhatsApp has triggered panic among students appearing for the Board Examinations. 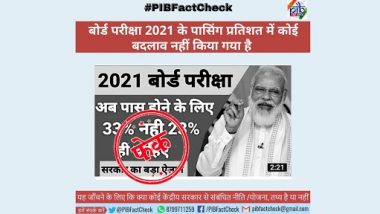 New Delhi, January 19: A viral post is doing rounds on social media platforms claiming that students of Class 10 and Class 12 will need just 23 percent to pass the board examination in 2021 from the earlier 33 percent. The viral post that is being widely circulated on social media platforms including Facebook, Twitter, WhatsApp has triggered panic among students appearing for the Board Examinations. The claim states: "In a post on social media, it is being claimed that Class 10 and Class 12 Board examination passing percentage has been reduced to 23 percent from  33 percent".

Rubbishing all the fake claims, a fact-check by Press Information Bureau (PIB) stated that the fake claim going viral on social media platform are fake and baseless. Issuing a clarification, the PIB said that the claim is totally misleading and said that the Ministry of Education has not made any such announcement in this regard. Schools Will Remain Closed Until December 2020? Fake Information Being Circulated on Social Media, No Official Announcement From Central Government So Far.

A similar post was going viral on social media platforms claiming that the Home Ministry ordered the immediate closure of schools and colleges. The news had triggered great confusion among school and college students. The government issued a clarification saying that the claim made by social media posts was fake and the images which were morphed.

Class 10th and 12th students passing percentage for board examination reduced to 23 percent from 33 percent.

A fact check by PIB states that the claim is fake as the Ministry of Education has not made any such announcement.

(The above story first appeared on LatestLY on Jan 19, 2021 06:58 PM IST. For more news and updates on politics, world, sports, entertainment and lifestyle, log on to our website latestly.com).

Comments
Tags:
Board exams Class 10 Board Exams 2021 Class 10 Exams 2021 class 12 board exam
Comments
You might also like