The morphed image features Prime Minister Narendra Modi alongside Hindi text that reads: "Total lockdown has been announced in the country from April 15 to April 30". 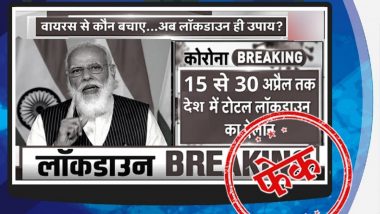 New Delhi, April 15: A picture that appears to be a screenshot of a graphic plate of a news channel is going viral on social media platforms. The image features Prime Minister Narendra Modi alongside Hindi text that reads: "Total lockdown has been announced in the country from April 15 to April 30". Since the image is widely circulated to wrongly suggest nationwide lockdown has been imposed, PIB Fact Check cleared the air. Mumbai CSMT Crowded Amid COVID-19 Spike? Old Video Goes Viral With Recent Dates, PIB Fact Check Reveals the Truth.

In a tweet on Thursday, PIB Fact Check, a dedicated platform that counters misinformation related to government schemes and policies, said the viral image is morphed and it carried a fake claim. "A morphed picture claims lockdown will imposed by the Indian government between April 15 and April 30. This claim is fake," read the tweet by PIB Fact Check. Fake Organisation Issues Notification Claiming to Offer Jobs Under Indian Govt, PIB Fact Check Reveals The Truth.

The government-run fact-checking platform also said the Centre has not made any announcement with regard to nationwide lockdown. "Please do not share such misleading pictures or messages," it urged citizens.

(The above story first appeared on LatestLY on Apr 15, 2021 01:30 PM IST. For more news and updates on politics, world, sports, entertainment and lifestyle, log on to our website latestly.com).