The PIB Fact Check on Friday dismissed reports that the name of the iconic Mughal Garden at Rashtrapati Bhavan will be changed. 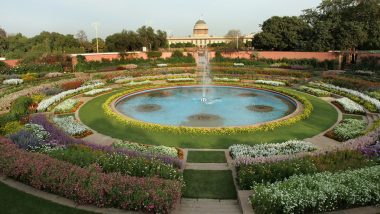 "Claim: The name of the Mughal Garden at Rashtrapati Bhavan will be changed. #PIBFactCheck: The claim is false. No such decision has been taken by Central Government," read a Tweet by the central government's department. The rumour about Mughal Garden's name being changed first surfaced in August last year after a government official had made the "announcement" on Twitter.

Best news in #covid times - The Mughal Garden inside the Rashtrapati Bhavan is now renamed to Dr. Rajendra Prasad Garden 👍

No, Mughal Garden Has Not Been Renamed as Rajendra Prasad Udyan:

Claim: The name of the Mughal Garden at Rashtrapati Bhavan will be changed.#PIBFactCheck: The claim is false. No such decision has been taken by Central Government. pic.twitter.com/bRm1nKIvNM

"Superb! Mughal Gardens have been renamed as Rajendra Prasad Udyan," Atul Kushwaha, who was then working at the Ministry of Telecommunications, had tweeted in Hindi. He had tagged Union Home Minister Amit Shah in his tweet. No official announcement, however, had been made. Earlier, the Hindu Mahasabha had demanded to rename Mughal Garden as Rajendra Prasad Udyan. Mughalsarai Tehsil Renamed as Pandit Deen Dayal Uphadyay Tehsil As Uttar Pradesh Cabinet Approves Decision.

Spread over a vast expanse of 15 acres, Mughal Garden has often been portrayed, and deservedly so, as the soul of the Presidential Palace. Rose remains a key feature of the Mughal Gardens. Apart from roses, tulips, Asiatic lilies, daffodils, hyacinth and other seasonal flowers beautify the gardens of Rashtrapati Bhavan. There are more than seventy varieties of seasonal flowers including exotic bulbous and winter flowering plants.

(The above story first appeared on LatestLY on Aug 21, 2020 07:33 PM IST. For more news and updates on politics, world, sports, entertainment and lifestyle, log on to our website latestly.com).