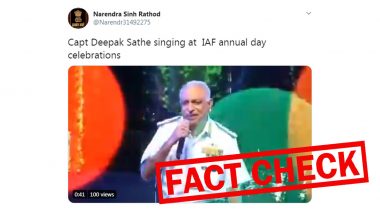 One of India’s most decorated pilots who served in the Indian Air Force (IAF), Captain Deepak Sathe was one of the two pilots who died in a plane crash at Kozhikode airport in Kerala on Friday. As condolences to the ill-fated incident continue to pour in on social media platforms, a video titled 'Capt Deepak Sathe singing at the annual day celebrations' is being widely shared on social media platforms. The clip shows an elderly person singing the Hindi song "Ghar Se Nikalte Hi" on stage during a celebratory event comprising of the IAF officials and their families. However, we found out that officer in the video is not late Capt Deepak Sathe who died in the plane crash during Vande Bharat Mission bringing people from Dubai to Kerala. We busted the fake claims and bring to you the reality of the video. Air India Express Plane Crash: Captain DV Sathe's Cousin Nilesh Sathe Shares Emotional Post on Facebook, Read Here.

As the video is widely shared, the comments section is filled with praises to the late officer who was also a good singer. But the truth is that the officer in the video is Vice Admiral Girish Luthra Retd. The song was sung by Vice Admiral Girish Luthra at the Golden Jubilee of the Western Navy Command. The original video which is available on YouTube proves that it is retired officer Luthra himself. The host of the event can be heard inviting the officer to the stage by addressing his name as Vice Admiral Girish Luthra. But not knowing the truth, many social media users are sharing the video claiming it is the late captain Deepak Sathe who recently passed away. Kozhikode Plane Crash: Did 40 Passengers of The Air India Express IX 1344 Flight Test COVID-19 Positive? Fact-Check Debunks Fake News.

Deepak Sathe was an alumnus of the National Defence Academy (NDA) in Pune and flew Air India planes after retiring from the military. He then shifted Air India Express. According to reports, the runway was very slippery that caused the plane to skid off and split into two pieces. The death toll currently stands at 18, including both pilots other than 149 being and 23 in critical condition. There were 191 people onboard during the incident.

Videos being shared on social media shows an officer singing 'Ghar Se Nikalte Hi' at an event. It claims that the officer in the video is late Captain Deepak Sathe who died in the recent Kerala plane crash.

While a video of an officer singing the song 'Ghar Se Nikalte Hi' is being shared on social media with the claim that it is Captain Deepak Sathe who died in the recent plane crash in Kerala, the truth is different. The video shows Vice Admiral Girish Luthra who sang the song at the Golden Jubilee event of the Western Navy Command.

(The above story first appeared on LatestLY on Aug 09, 2020 09:31 AM IST. For more news and updates on politics, world, sports, entertainment and lifestyle, log on to our website latestly.com).