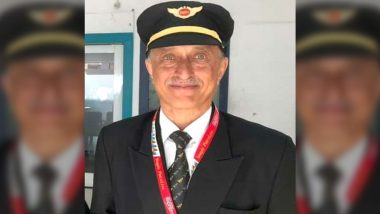 Kozhikode, August 8: Cousin of Captain DV Sathe, one of the two pilots killed in the Air India Express crashing landing on Friday, shared an emotional message on Saturday. In a Facebook post, Nilesh said that "Its hard to believe that Dipak Sathe, my friend more than my cousin, is no more." Air India Express Flight Crash: Captain of Aircraft Deepak Vasant Sathe, Who Died in Kozhikode Mishap, Was Ex-IAF Pilot; Here's More About Him.

Nilesh said that Dipak was an experience aerial operator with 36 years of flying experience. "A passout of NDA, topper in the 58th course and an awardee of 'Sword of Honour', Dipak served Indian Air Force for 21 years before joining as a Commercial Pilot with Air India in 2005," he said. Air India Express Flight Crash: Captain Deepak Vasant Sathe of Crashed AI Express Flight Earlier Flew MiG-21 in Indian Air Force.

His cousin also informed that DV Sathe "survived in air crash in early nineties when he was in Airforce. He was hospitalised for 6 months for multiple skull injuries and nobody thought that he will fly again. But his strong will power and love for flying made him clear the test again. It was a miracle."

Sathe was a former Indian Air Force (IAF), who flew MiG-21 fighter aircraft with 17 Squadron in Ambala. Sathe, who also served as an instructor at the IAF Training Academy, had taken premature retirement from Air Force and shifted to commercial flying with Air India.

Air India Express AXB1344, a B737 aircraft, with 180 passengers on board and six crew members, landed on Runway 10 at Kozhikode International Airport in Kerala amid visibility of 2,000 metres in heavy rainfall, but overshot into the valley and broke down into two pieces. In the incident, 18 people died.

(The above story first appeared on LatestLY on Aug 08, 2020 01:40 PM IST. For more news and updates on politics, world, sports, entertainment and lifestyle, log on to our website latestly.com).