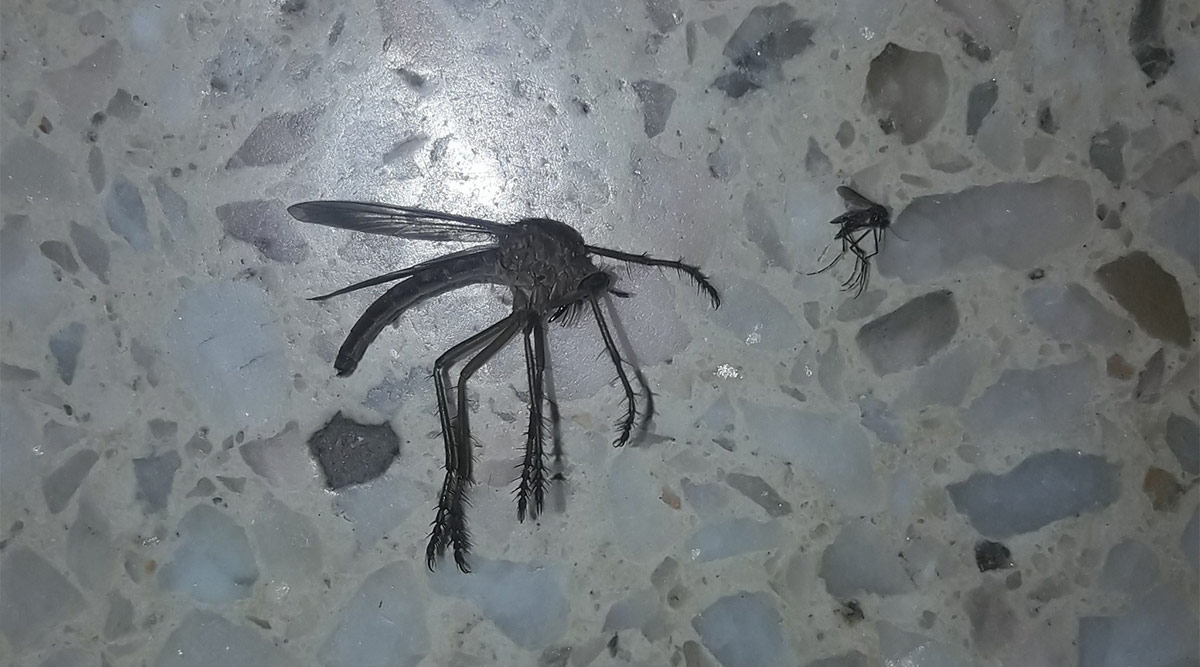 The sight of mosquitoes is so annoying. The buzzing sound of these small insects just prompts an immediate reaction to killing them. But while we all have often smacked these small insects, a picture of a visibly giant mosquito is scaring people. A man from Argentina shared an image of a giant mosquito that entered his house through the window. Compared to the other mosquitoes that we've regularly seen, this insect is disturbingly large. When this image was shared on Twitter, it went viral and of course, people were shocked by seeing its size. Although the user mentioned that he did not get bitten by the insect. His mother managed to kill it quickly with a bug spray. Ugandan Man's Farts Can Kill Mosquitoes 6 Miles Away, Hopes to Get Hired by Insect Repellent Company (Watch Video).

Twitter user Ezequiel Lobo, a resident from an Argentine city of Cordoba, posted a picture of this large insect on his feed. In the caption, he wrote, "Look at the size of the mosquito which entered my house." To give users an idea about its size, he even placed another normal mosquito next to it. In the following tweet, he mentioned that thankfully his quick-thinking mother stepped in with a bug spray and killed that insect. But adding that it is fearful, even wondering if the insect was a "new Chernobyl evolution or am I in Jumanji and didn't know it?" The picture is going viral and users are equally scared with the size.

Check Picture of the Giant Mosquito in Argentina:

The picture has got over 23,000 retweets and over a lakh likes. Turns out he wasn't the only one to have encountered this big mosquito. Check some of the reactions on this viral picture.

Here's Video of Another Big Mosquito

Ayer me cruce esto, me mando a dormir afuera pic.twitter.com/6kmW3i9n6p

Ok, What Did You Just See?

Its Hired by Dracula

A certain user called it an "alien" species. Certain users called it a Psorophora ciliata species but there is no confirmation about it. This picture reminds us of the world's largest mosquito species originating in Japan which was found in the year 2017 by a Chinese expert. The holorusia mikado insect had wings as long as 11.5 cms and it was displayed in the Insect Museum of West China.