A man in Uganda has claimed that his fart can kill mosquitoes. 48-year-old Joe Rwamirama from Kampala in Uganda says scientists have launched a study into the chemical properties of his unique toxic gas. 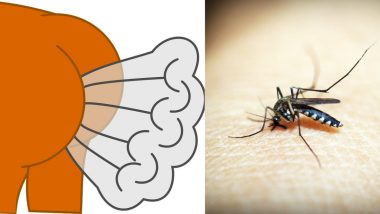 A man in Uganda has claimed that his fart can kill mosquitoes. 48-year-old Joe Rwamirama from Kampala in Uganda says scientists have launched a study into the chemical properties of his unique toxic gas. Apparently, Joe is known as the man to be befriended if you are down with a mosquito-related disease. And Joe credits himself for the fact that nobody in his home village has ever contracted malaria. He says mosquitos which are over a six-mile radius can get killed by his fart. Joe wants to sell his fart to insect repellent companies one day. He said, "Imagine buying a Raid can with my face on it!" Fart Pills That Make Flatulence Smell Like Roses and Chocolate Every Time You Pass Wind Invented By a Very Thoughtful Frenchman.

Talking about Joe's unique ability, local barber James Yoweri said, "He is known all over the city as the man who can kill mosquitoes with his farts. When Joe is around, we all know that mosquitoes will vanish. He is respectful of people around him and will only fart when there are mosquitoes around which bring malaria. His farts get rid of this disease."

A local chief said, " heard about Joe's gift and I took him in to help mop out the mosquitoes infesting our surroundings. He respectfully drops these bloomers, and it helped eradicate the insects. He does his thing, and they drop - like flies." Jose said, "I eat ordinary food just like everyone else, but no insect can lay a foot on me, not even a fly. I smell like a normal man, and I bathe daily, and my farts are just like everyone else, they are only dangerous to small insects and especially mosquitoes."

(The above story first appeared on LatestLY on Dec 12, 2019 05:50 PM IST. For more news and updates on politics, world, sports, entertainment and lifestyle, log on to our website latestly.com).