Iguanas Are Falling off Trees AGAIN! Viral Images and Videos Show Frozen Reptiles Losing Their Grip Due to Extreme Cold in Florida 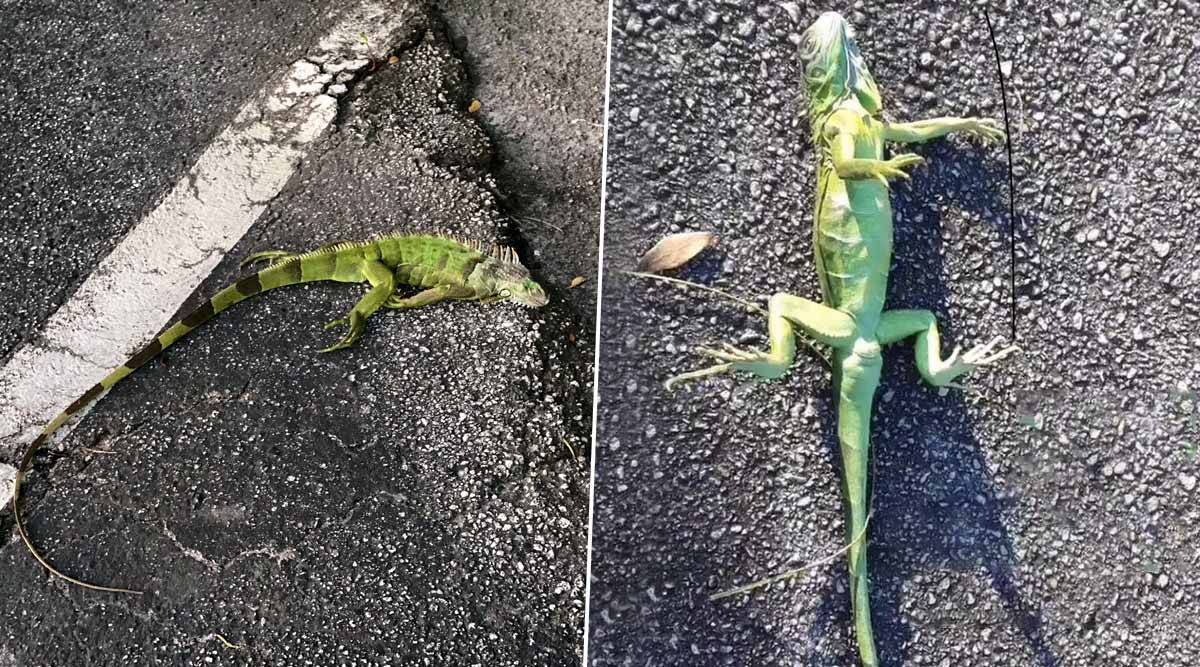 It is extremely cold in Florida. According to media reports, temperatures dipped into the 40s, and it is said to be the coldest air Floridians have experienced in recent years. It is well documented that South Florida’s iguana population goes into shock whenever the temperatures dip below 50 degrees. Amid the cold temperatures, the reptiles are falling off trees, again. The cold-stunned creatures appear to be dead on the ground, but they are not. Viral images and videos, uploaded on Twitter show the frozen iguanas losing their grip due to extreme cold in the US state. Alligators Poke Noses Up Above the Ice to Survive Chilling Winter in North Carolina.

The National Weather Service, Miami-South Florida issued an alert on January 22, 2020, about the possible falling iguanas. “This isn’t something we usually forecast, but don’t be surprised if you see Iguanas falling from the trees tonight as lows drop into the 30s and 40s. Brrrr!” reads the tweet. Their predictions were correct as residents were indeed treated with the reptiles, lying on the ground, motionless.

Jan 21 - This isn't something we usually forecast, but don't be surprised if you see Iguanas falling from the trees tonight as lows drop into the 30s and 40s. Brrrr! #flwx #miami pic.twitter.com/rsbzNMgO01

The creatures were seen not moving in the middle of sidewalks and backyards, appearing to be dead. They were actually feeling too cold to move. When frozen, they quickly fall out of the trees; they call home. Floridians took to Twitter showing the phenomenon. The frozen green-scaled reptiles lying on the streets, many of them with their legs in the air, possibly dreaming of warmer climates, sooner.

Iguanas Are Falling From Trees!

South Florida is waking up to cold temperatures and iguanas falling from the sky. Might as well make him comfy with blankie and hat while he thaws out. #FloridaWinter #iguana pic.twitter.com/1w1cgtZ8vx

They Appear to be Dead, But They Are Not!

Those iguanas you see everywhere will eventually wake up and scurry off. Here’s one outside our Broward Bureau doing just that: pic.twitter.com/UKV6BtWuhU

Iguana know what this little🦎is dreaming of — probably Hawaii (No iguanas were harmed in the making of this clip) Just chillin’ 🥶 #FallingIguanas @OfficialJoelF pic.twitter.com/bqFzLMSYZO

Iguanas have the nickname, “chicken of the trees,” and scientists warn that even if the animals are not able to move their limbs, they can still deliver a painful bite if handled carelessly. So, be careful, Floridians! Meanwhile, reports have also come across stating that people are taking advantage of this situation, as they are selling iguana meat online.