A video has captured the exact moment when a bolt of lightning struck the city's iconic monument, the Statue of Liberty. It is amazing yet scary to see nature showing its side. The weather was quite wild and frightening as lightning bolts were seen striking across places. 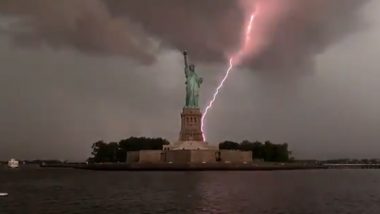 The city of New York and around experienced a severe thunderstorm last night and a visual representation of the situation has been captured on video. A video has captured the exact moment when a bolt of lightning struck the city's iconic monument, the Statue of Liberty. It is amazing yet scary to see nature showing its side. The weather was quite wild and frightening as lightning bolts were seen striking across places. The video that captured a pink coloured striking bolt on Statue of Liberty is going viral with over a million views in a few hours. Lightning Captured From Space! NASA Astronaut Shares Stunning Video of Violet Fringes Spotted From ISS.

Twitter user Mikey Cee was able to capture the exact time when a massive bolt of lightning struck on Statue of Liberty and he called it "The best video I ever captured". Looking at it, even you'd agree that it is one of the best and close shots you'd have seen of lightning on the iconic monument. It looks something you'd see in a movie with special effects but unless it's not. It is quite scary yet incredible at the same time.

Watch The Video of Lightning Strike on Statue of Liberty:

The best video I ever captured. #NewYork #WeatherChannel #NYC pic.twitter.com/cOBqTqJ9LO

Wow! Looks so amazing but yet so scary. The video has got 1.7 million views and diverse reactions. Some of them even called it a reminder of the political situation in America right now. Check some of the reactions.

Something Ominous About It!

Any other year this is cool. In 2020 it just comes off as particularly ominous.

Spectacular! And very spooky. A bit tempting to

attach meaning to this, in light of recent events.

But even without that - still spectacular! ❤️

I feel like I'm watching a scene out of one of the Ghost Busters movies. How can this possibly bode well for America?

Signs From God For Some

If you don't believe in signs from God then you aren't paying attention. Pay attention 👇 https://t.co/Id9ihmP0QI

That is incredible. There's a metaphor in there somewhere

The most foreboding and accurate metaphor for the state of America that nature could have produced lol.

Shot Will Make it in a Movie

The thunderstorms resulted in heavy rains and flooding in parts of New York and New Jersey yesterday, warnings were issued to the people for the same. There was even a power problem for thousands in Jersey. Lightning bolts were seen striking at other landmarks too.

(The above story first appeared on LatestLY on Jul 23, 2020 04:49 PM IST. For more news and updates on politics, world, sports, entertainment and lifestyle, log on to our website latestly.com).