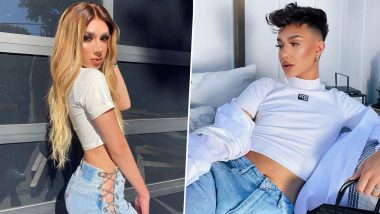 During the podcast, "Impaulsive" co-host Mike Majlak asked Charles if he would consider starting an OnlyFans account to which Charles replied that he wants to "so badly." He went ahead to say, "I've already posted my ass pictures all over Twitter and stuff so I feel like I have nothing to hide at this point".  He further revealed, "I've honestly thought about it, they did send me an email, it was a very lucrative offer."

Charles had recently grabbed headlines for posting his own semi-nude photos on Twitter and saying that it was actually hackers who accessed his iCloud photos and threatened to leak them. Talking about the OnlyFans offer he said, "They reached out to me about it, I don't know, I just [...] don't think it would be the best thing for my brand, really. Especially with a lot of younger kids, I would have no problem tweeting about it, but I feel like if I ever promoted it anywhere else I'd be a little spooked. I don't want 12-year-olds buying my OnlyFans."

Charles also said that that he'd love to do OnlyFans because of the "nice check", but he has decided against going for OnlyFans. Recently, James was asked about his response to the whole drama going on with Tati Westbrook, Shane Dawson and Jeffery Star. James said to the press, "Who knows? I’m just staying out of it, minding my own business, just moved into a beautiful new house, I have great friends around me." Right from Shane Dawson's YouTube channel getting demonetised to Tati making blasting revelations about how Star and Dawson "fed her poisonous lies" about James Charles,  controversy had recently shaken up the YouTube beauty world.

(The above story first appeared on LatestLY on Jul 21, 2020 08:19 PM IST. For more news and updates on politics, world, sports, entertainment and lifestyle, log on to our website latestly.com).