Kerala Couple Based in UK Wins Lamborghini and £20,000 Cash in Dream Car Online Competition And Their Reaction is Priceless (Watch Video)

Shibu Paul and Linnet Joseph, a couple from Kerala currently living in Nottingham, UK won a brand new Lamborghini and £20,000 (Rs 18.94 lakh) in cash in a dream car and lifestyle competition! A video has captured their shocked reaction on discovering what they have just won. 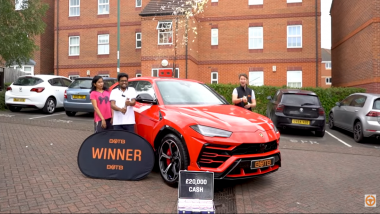 This pandemic situation has taken a lot of jobs of people from across the world, but luck has favoured well on an Indian couple based in the UK. Shibu Paul and Linnet Joseph, a couple from Kerala currently living in Nottingham, UK won a brand new Lamborghini and £20,000 (Rs 18.94 lakh) in cash in a dream car and lifestyle competition! Shibu, who was struggling to get a job in the pandemic, had even forgotten that he had purchased tickets for the competition. But luck showered on them and they are now the owners of a brand new luxe car with 18.94 lakhs of cash. The couple has decided to keep the cash prize instead of the car. A video has captured their shocked reaction on discovering what they have just won. Sydney Woman Wins $50 Million With Her First-Ever Lottery Ticket Bought While Holidaying.

Shibu worked as a sound engineer in Kochi and shifted to the UK about a year ago. He married Linnet Joseph, who works as a nurse at Nottingham's City Hospital. While Shibu struggled to find a decent job in this current global crisis situation, he had bought three tickets of the BOTB Dream Car competition. It is a company that runs online competitions and is operational at most airports in the UK. Shibu had got three tickets some time ago and even forgotten about it, but when there was a knock on their door with a Lamborghini waiting outside, it was unbelievable. There was more surprise when he opened the boot of the car and found the cash prize too! The couple's happiness knows no bounds and their reactions have been captured on video. Nottinghamshire Couple Go to Buy Cat Food, Return as Millionaires!

The video shows how unexpected it was for them and the way he wants to just touch the car to believe it. Shibu was applying for jobs and waiting to get calls from the prospective companies but it was lady luck who had arrived instead. Talking about this unpredictable win Shibu was quoted to The New Indian Express, "I had participated three times and I didn’t want to become an addict. Last time, I filled the form and forgot about it completely. My wife was taking a nap after her night shift, and when the doorbell rang, we were greeted with a brand new Lamborghini worth £195,000 and prize money of £20,000. We are so grateful to god, as we were worried about my job prospects." The couple has decided to keep the cash instead of the car, as they need cash at the moment. They plan to buy a house soon as they are currently living on rent.

(The above story first appeared on LatestLY on Jul 10, 2020 10:03 AM IST. For more news and updates on politics, world, sports, entertainment and lifestyle, log on to our website latestly.com).