A couple in Ollerton, England went to buy cat food for their pet Shorty and returned back becoming millionaires! They won £1million scratchcard which they got at a petrol station when they went to buy cat food. They have credited their win to their feline Shorty. 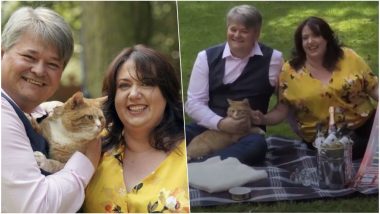 Couple win lottery thanks to their cat (Photo Credits: Twitter and Video grab)

A couple in Ollerton, England went to buy cat food for their pet Shorty and returned back becoming millionaires! Andrew and Paula Hancock are the lucky winners of £1million scratchcard which they got at a petrol station when they went to buy cat food. After a long tiring day at work both the husband and wife went to refill the fuel in their car and buy some cat food. But while paying for the fuel they bought the scratchcard. On scratching it, they could not believe their eyes of winning the prize! They have credited their win to their feline Shorty. Lottery Winner Hides from Greedy Relatives by Wearing ‘Scream’ Mask.

Andrew drove to the local petrol station and he wanted to buy some chicken treat for Shorty. He bought a £5 Monopoly Millionaire scratchcard. He said, "I realised I’d forgotten the cat food... I thought I’ll scratch this off before going back in. I scratched off the lucky symbol – a duck – and couldn’t believe what I was seeing. I looked and looked again and started to get a bit hot when I realised I won. I checked it about seven or eight times." The excitement on their face could not be hidden. They headed straight home with no cat food and broke the news to their children.

Check Video of Millionaire Couple With Their Pet:

Shorty is now promised a life of luxury. "If it wasn't for Shortcake, we wouldn't be millionaires," Mr Hancock told BBC. They have promised that Shorty will definitely get an upgrade from his usual cat food. Even during the press call, Shorty sat with the Hancock family, posing in style, as if fully aware of him being the factor of making his family a millionaire. The couple is now planning to plan a trip to Australia out of their prize money.

(The above story first appeared on LatestLY on Aug 14, 2019 12:06 PM IST. For more news and updates on politics, world, sports, entertainment and lifestyle, log on to our website latestly.com).