German wasps have invaded many parts of the UK. The killer Asian hornets are also on the loose with the onset of summer. German yellowjackets are bad-tempered than common wasps. There are around 200 billion German yellow jackets, which are bigger than normal wasps, but smaller than hornets in the UK and around 250 billion common wasps. 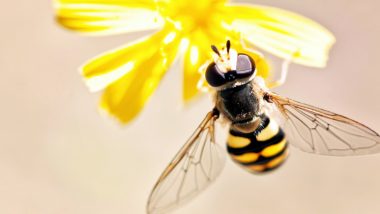 German wasps have invaded many parts of the United Kingdom. The killer Asian hornets are also on the loose with the onset of summer. German yellowjackets - whose Latin name is Vespula germanica - are 'much more bad-tempered' than common wasps. Vespula vulgaris are known for their terrible sting. There are around 200 billion German yellow jackets, which are bigger than normal wasps, but smaller than hornets in the UK and around 250 billion common wasps. Windfall fruit can ferment on its own and the high sugar content turns into alcohol, especially if the fruit is damaged and left for several days. How to Identify Asian Giant Hornet? Know Everything About Murder Hornets 'With a Sting That Can Kill' Found in US.

Cleankill boss Paul Bates was quoted as saying, "The best thing to teach anybody is not to frantically wave arms around at wasps as this suggests that they are under attack...and they will emit a pheromone to attract their mates, who are also likely to have been feasting on fermented fruit." There are also reports of two-inch-long critters, swarms of Asian hornets - whose sting can kill set to arrive in the UK next month. Record-breaking spring temperatures have caused abundant fermenting of fruit. 'Murder Hornets' in US For The First Time; Know About The Largest Wasps That Kill Almost 50 Humans Per Year!

Saw this yesterday no idea what it is and it was huge pic.twitter.com/elDcT5hOZV

I need help. What do I do!!?? Swear to god, thing looks like it could kill me, it’s huge. pic.twitter.com/lWC9kq3Eli

On Tuesday, emergency services were called to a school in western Germany after multiple students complained of wasp stings. Around 16 students were taken to nearby hospitals for treatment. Wasps are protected in Germany under the Federal Nature Conservation Act, and disturbing, capturing, injuring or killing them without reasonable cause can carry fines between €5,000 and €50,000. However, people allergic to wasp stings can kill insects for self-protection.

(The above story first appeared on LatestLY on Aug 27, 2020 06:16 PM IST. For more news and updates on politics, world, sports, entertainment and lifestyle, log on to our website latestly.com).