How to Identify Asian Giant Hornet? Know Everything About Murder Hornets 'With a Sting That Can Kill' Found in US 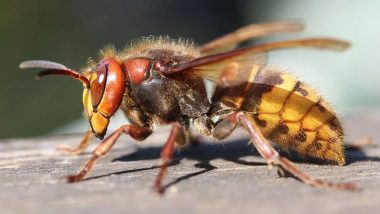 The world's largest hornet nicknamed the 'Murder Hornet' that feeds on honey bees, has been found in the United States. A sting of this giant Asian Hornet (Vespa velutina) can prove fatal even to humans. The deadly insect has started to emerge out from their winter hibernation. As entomologists are trying to wipe this deadly insect, we bring to you the way in which you can identify the hornet. The hornet can even sting through most beekeeper suits inject seven times the amount of venom when compared to a honey bee. They sting multiple times are known for attacking honey bee hives and eat the bees, their larvae and pupae. 'Murder Hornets' in US For The First Time; Know About The Largest Wasps That Kill Almost 50 Humans Per Year!

It normally lives in the forests and low mountains of eastern and Southeast Asia and feeds on large insects like wasps and bees. It was dubbed the 'Murder Hornet' in Japan, where it is known to kill people. The Asian Hornet is a highly aggressive predator of native insects and us dangerous to honey bees as they are one of the biggest pollinators. They also feed on other insects, fruits and flowers. Murder Hornets Can Cause Ecological Risks! Here Is How Scientists Planing to Eradicate the Asian Giant Hornet Spotted in the US for the First Time.

You Can Identify Asian Hornets by Their Following Characters:

This is the only hornet with an entirely dark brown or black velvety body, bordered with a fine yellow band. As concerns about this deadly creature increased, Washington State Department of Agriculture took to Facebook explaining how the insect looks.

According to WSDA, there have been around roughly 150 reports from the public about credible sights of the insect. The hornet was sighted and confirmed for the first time near Blaine, Washington, close to the Canadian border.  For people who work as gardeners, plumbers, maintenance personnel on roads and footpaths, make sure to check the area of these hornets before starting to work.

(The above story first appeared on LatestLY on May 05, 2020 06:41 PM IST. For more news and updates on politics, world, sports, entertainment and lifestyle, log on to our website latestly.com).