Kim Kardashian and Kanye West's love story has come to an end it seems. As reportedly, the former has taken the big step and filed for a divorce from the latter. Amid this, Twitterverse has churned some hilarious memes which cannot be ignored. Have a look. 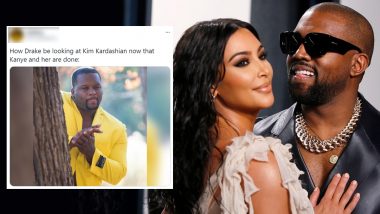 Kim Kardashian and Kanye West's love story has come to an end it seems. As reportedly, the former has taken the big step and filed for a divorce from the latter. This news is not at all surprising, as earlier, rumours had it that all is not well in their paradise. E! has mentioned 'irreconcilable differences' as the major reason for the separation. FYI, the two have been happily married (that's what we saw online) for seven years. As soon as this news broke online, fans of Kimye were shattered. However, there were also a few who grabbed this opportunity and churned memes. Kim Kardashian Files for Divorce From Kanye West: 8 PDA Moments of #Kimye That’ll Make You Wish They Don't Split!

From bringing Keeping Up With The Kardashians in the meme game, remembering Drake to even laughing out at Kanye's upcoming album after the divorce, meme-makers got super creative and let out some funny jokes on Twitter. In case, you haven't yet seen them all, here, check out some reactions below. Kim Kardashian Files for Divorce from Kanye West After 6 Years of Marriage; Pictures of 'Kimye' to Remember the Hot Couple By.

Photo of Ted Cruz calling Kris Jenner to thank her for leaking that Kim and Kanye divorce news to the media to take the attention off of him for a few days. pic.twitter.com/n3NhyNCxk4

How Drake be looking at Kim Kardashian now that Kanye and her are done: pic.twitter.com/5urOorM6EK

KUWTK would stop filming right before Kim and Kanye get divorced- pic.twitter.com/78iACQ9tXF

Yes yes the divorce is gonna be painful asf, but the album Kanye is gonna produce after this?!! pic.twitter.com/ULStWrlGdV

Well, we feel, these early memes is just the start, as some super-duper ones are surely on the way. Even though the tinsel town is abuzz with the news of Kim and Kanye's divorce finally on the cards, nothing has been made official by the couple yet. So, what you think, are they really getting separated? Tell us your opinion in the comment section below.

(The above story first appeared on LatestLY on Feb 20, 2021 03:12 PM IST. For more news and updates on politics, world, sports, entertainment and lifestyle, log on to our website latestly.com).