Leonardo DiCaprio Gets Hit in the Face With a Volleyball, Netizens Turn His Pictures into Hilarious Memes

Leonardo DiCaprio has currently become an internet trend and it is not because of his film or his performance. Recently, pictures of the actor enjoying a game of Volleyball and getting hit in the face went viral and now netizens have made them into hilarious memes. Check out what happens when Leo gets hit with a Volleyball! 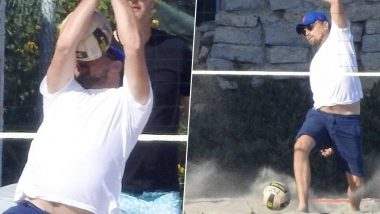 Leonardo DiCaprio is currently enjoying Summer in Malibu with his friends. The season is known to get the best of us in a sporty spirit and it looks like the same happened with Leonardo too. The Once Upon A Time in Hollywood actor was recently spotted enjoying a game of Volleyball with his friends. After pictures of him enjoying the game surfaced online, one specific picture has grabbed the most attention. In one of the pictures that is now going viral, Leonardo is seen getting hit by a Volleyball on his face. Ouch! Doesn't that sound bad? Once Upon A Time In Hollywood: This New Poster of the Leonardo DiCaprio, Brad Pitt and Margot Robbie Starrer is High on Retro Feels.

Well, we are sure it's a harmless hit but now, the said picture is being shared by fans of the actor all over social media. Not just this, the viral picture is now being turned into a funny meme. Several Twitter users are now posting hilarious memes made out of this picture. Who knew, Leonardo's summer outing could become viral like this.

After Page Six first put out the pictures of Leonardo attempting to make a bump pass and failing miserably at it, netizens were quick enough to put it to good use.  Once Upon a Time in Hollywood Trailer OUT: Leonardo DiCaprio, Brad Pitt Bring Out The Quirky In Quentin Tarantino's Ninth Film (Watch Video)

Check out some of the memes on Leonardo's Volleyball picture:

When you shoot your shot but she’s in a committed relationship with 2 kids #LeonardoDiCaprio #relationships pic.twitter.com/VF1H50lAwM

#LeonardoDiCaprio's run-in with a volleyball is more evidence of the @Mets curse.

I had to. Lol.#sorrysorry #LeonardoDiCaprio

Leonardo DiCaprio's next release is Quentin Tarantino's Once Upon A Time in Hollywood. The film also stars Brad Pitt and Margot Robbie in lead roles. It is slated to hit the theatres this August.

(The above story first appeared on LatestLY on Jun 26, 2019 10:00 AM IST. For more news and updates on politics, world, sports, entertainment and lifestyle, log on to our website latestly.com).