McDonald's BTS Meal: From McJordans To BTS Meal; Here's Everything You Need To Know About McDonald's History In Celebrity Collaborations

The BTS meal out last week has been creating quite the stir across these fast-food chains. It might just be another average McDonald's burgers and fries with a swanky pop star name to the side, but you have to agree they have figured out a way to capitalize the millennials and Gen Z's unbridled adulation for celebrity culture. Let's take a look at their other celebrity collaborations 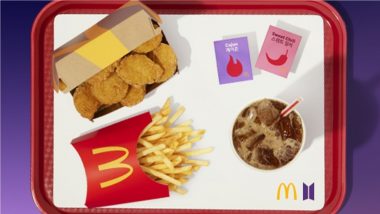 Odds are no matter where you live, you've heard about the latest McDonald's Celebrity collaboration that is selling out like hot cakes across the globe. The BTS meal out last week has been creating quite the stir across these fast-food chains. It might just be another average McDonald's burgers and fries with a swanky pop star name to the side, but you have to agree they have figured out a way to capitalize the millennials and Gen Z's unbridled adulation for celebrity culture. It's like they hit the treasure trove in the Ideas-R-US department. Their marketing ingenuity is something to be applauded and revered. This isn't the first, nor it will be the last marketing campaign targeted at a younger demographic. In light of the immense successes garnered by their latest celeb collab,  let's take a look at their past celebrity collaborations.

In 1991, McDonald's decided to tap into the American Basketball team Chicago Bulls hype and released the special McJordan burger named after Michael Jordan. This creation was the first of its kind for the Fast food giants and it contained a cheeseburger on a sesame seed bun. It also had pickles, raw onion slices, bacon and barbecue sauce. The McJordan was only made available in Chicago creating frenzy and envy amid the fans. They paid $3.59 for the custom cheeseburger, large fries and a medium soda.

During the pandemic, McDonald's has amassed a sizable Marketing war chest since the world had come to a standstill and investing money in marketing campaigns took a back seat. Instead, they appropriated the campaigns to free delivery for families hunkered down together. In 2020, the company announced that it will reengage its customers with new marketing campaigns concentrating on celebrity collaborations. Enter, Travis Scott Meal. Almost 30 years after their first celebrity collaboration, with Travis Scott in September 2020. The meal included Quarter Pounder with cheese, fries with barbecue dipping sauce and a Sprite. The campaign was so successful, that McDonald’s experienced a shortage in Burgers. Unlike McJordans this meal was made available across the country.

Following the immense success of their previous collaboration, McDonald's announced their third celebrity collaboration with J Balvin in October 2020. However, unlike The Travis Scott meal, the J Balvin's meal didn't meet the hype. It came with a Big Mac, medium fries with ketchup, and an Oreo McFlurry.

That brings us to our latest celebrity collab - The BTS meal; McDonald's launched its latest "famous orders" meal on May 26 with the K-pop stars. Not only is the meal flying out the drive-thrus at warp speed, but The BTS-themed fast-food packaging also is so in-demand that people are now reselling paper bags, boxes, drink cups, and sauces on eBay.

McDonald's has found a way to reach the younger demographic and they are not going to let up capitalising on it anytime soon. Whatever the next collab, we're sure the world will be right at its doors lovin' it.

(The above story first appeared on LatestLY on May 31, 2021 12:57 PM IST. For more news and updates on politics, world, sports, entertainment and lifestyle, log on to our website latestly.com).