People really had questions about why would they use such a picture? We too aren't sure what was the thought behind putting such a picture but people took over with memes real quick. 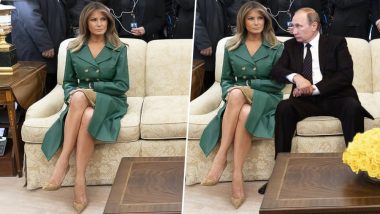 Melania Trump picture gets made into memes (Photo Credits: Twitter)

Birthday pictures are supposed to be the best ones unless it is your best friend's birthday. And when it is the first lady of America Melania Trump, the picture should have been the best of best. Melania Trump turned 49 on April 26 and the White House released a rather awkward picture of Melania Trump.  The picture has Melania Trump sitting on a couch with reporters and photographers surrounding the First Lady. Soon enough, the internet decided to place other characters and people on the couch, making funny memes on her. So her birthday picture turned into a meme material. Melania Trump Gardening Photo Goes Viral as a Meme Material! Check Funny Jokes Made on Her.

White House honoured FLOTUS with her picture and caption, "Happy Birthday, @FLOTUS!" The picture was taken during a bilateral meeting between Donald Trump and Czech Prime Minister Andrej Babis in the Oval Office. But while they had a good intention of wishing the first lady, people were quick with photoshop. Twitterati Compare Melania Trump to Movie Characters for Her Outfit During Egypt Tour and the Results Are Hilarious!

Putin Drops in to Wish

Weren't we kind of expecting this?

To wish her a happy birthday, you posted a picture of the first lady looking miserable in a room full of people with their microphones and cameras pointed at someone else in the room? Classy 🤣🤣🤣

People really had questions about why would they use such a picture? We too aren't sure what was the thought behind putting such a picture but people took over with memes real quick. Not as a Happy Birthday for Melania Trump we guess.

(The above story first appeared on LatestLY on Apr 28, 2019 12:44 PM IST. For more news and updates on politics, world, sports, entertainment and lifestyle, log on to our website latestly.com).