A viral video capturing a woman performing aerobics with the Myanmar parliament complex in the background has shocked netizens. Completely unaware of what is going on behind her in the video she can be seen doing her exercise routine while a convoy of SUVs lay siege around the parliament complex. 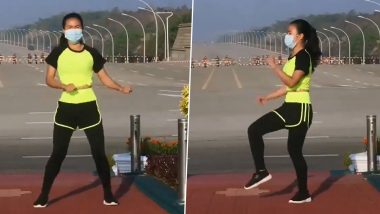 A viral video capturing a woman performing aerobics with the Myanmar parliament complex in the background has shocked netizens. Completely unaware of what is going on behind her in the video she can be seen doing her exercise routine while a convoy of SUVs lay siege around the parliament complex.  In the now-viral footage in capital Naypyidaw, the woman, Khing Hnin Wai appears to continue her aerobics workout with upbeat music as black SUVs drive up to a security checkpoint on the road leading to the Assembly of the Union complex behind her. It seems like the convoy presence increases in no time just on the beats of her music. India Expresses Deep Concern Over Military Coup and Detention of Top Political Leaders in Myanmar, Says Monitoring Situation Closely.

The dancer seems to be completely devoted to her workout paying no attention to what is happening behind her. She continues to make punching motions without realizing a Military convoy reaching the parliament can be seen behind the woman as she performs aerobics. This video shared on Twitter has been viewed millions of times so far, also been tweeted many times and has been liked by millions. It is seen in the video that the woman kept doing aerobics in the middle of fast music and the army occupied the Parliament House.

Khing Hanin Wei is said to be a teacher of physical education.

Earlier, the Myanmar army overthrew the coup on Monday and detained several leaders, including top leader Aung San Suu Kyi. These vicissitudes are being considered very important for this South East Asian nation moving towards democracy. The military coup in this country, which has been under military rule for five decades, has been condemned by various countries and organizations in the world and has demanded the release of detained leaders.

About the credibility of the footage, the woman made a Facebook post attaching all the past videos she made at the same location without being aware of its importance. The English translation of her post reads: "If one is white, all are white. If one vote, all vote. For some, it's just a matter of time. Friends in Acc already know that they are from the competition and have written various captions without knowing anything. Intended for existing Acc owners. I've never been to any organization with a sense of humour, I never went dancing to be Sally. In the morning, I usually go to bed as soon as I get up. Nay Pyi Taw has always been an adult route, so I thought it was normal and continued. I did not expect this to happen. Some of the security guards on duty are already friends. Please do not upload captions for this morning video file. Thank you all. Daw Khine Hnin Wai. Intermediate (Physical Education)"

Army-owned Mayawadi TV announced on Monday morning that Army Chief General Min Aung Laing had taken control of the country for a year. The declaration referred to the part of the Army's drafted constitution that allows the army to take control of the country in its hands in the event of a national emergency. He said the reason for the coup was the government's failure to postpone the elections despite the coronavirus crisis and the army's claims of fraud in the elections held in November last year. The announcement on military-controlled Myawaddy TV came after an earlier declaration that because national stability was in jeopardy, all government functions would be transferred to military chief Senior Gen.

(The above story first appeared on LatestLY on Feb 02, 2021 11:46 AM IST. For more news and updates on politics, world, sports, entertainment and lifestyle, log on to our website latestly.com).