#NewPassword meme is officially the first meme of 2020 which is funny and relative at the same time, and doesn’t hurt anyone’s sentiment. The trend is about the common annoyance that all of us face while creating a new password. 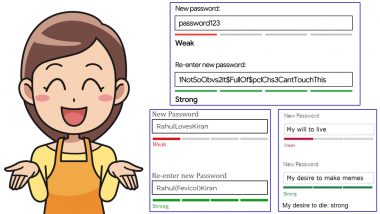 How good are you in making memes? The end of the past decade has majorly taught us to use our humour and give every trend, a hilarious twist. And we picked up well, it seems. #NewPassword meme is officially the first meme of 2020 which is funny and relative at the same time, and doesn’t hurt anyone’s sentiment. The trend is about the common annoyance that all of us face while creating a new password. It not only attracted the netizens, but popular brands as well. Mumbai Police, Google India and all our lovely Tweeple, everyone participated in this trend. Hence, we see #NewPassword memes as the latest fad on the internet. Twitter users are having quite a field day, as they make hilarious jokes and memes for the new passwords. Happy New Year's Day 2020 Funny Memes: These Jokes on Bidding Goodbye to 2019 Will Keep Your Resolution of 'New Year, New Me-me'.

So, what is the #NewPassword meme? And why is it trending so much? Admit it, at one point, all of us have faced difficulties while keeping a new password on social media accounts. And finally when you memories it, here comes the New Password challenge. It urges you to consider changing it. To do it we face a common annoyance—one where the password is supposedly ‘weak’ and the other which is ‘strong’ and have enough characters to be used as a decent password. The viral meme consists of this very template, which Twitter users are filling with some hilarious responses. Dog With Protest Signs is New Version of Viral 'Dude With Sign' Memes and Jokes.

Not just Tweeple, but brands and other official Twitter handles too joined the trend, sharing their puns. Mumbai Police, Google India, Fevicol, UP Police and many more have shared their meme-able internet passwords.

Wondering if it's time for a #NewPassword?

Are you considering to change your internet passwords? Make sure you have some meme-worthy words to put in and create it strong enough for further use. And also, so that you can memorise it! We have just begun 2020; there are surely going to be more buzz that will make all of us laugh our heart out.

(The above story first appeared on LatestLY on Jan 10, 2020 04:11 PM IST. For more news and updates on politics, world, sports, entertainment and lifestyle, log on to our website latestly.com).