This incident sparked massive furore both offline and online and with people condemning the act. The NSFW video has gone viral, but we warn the viewers that this is graphic. 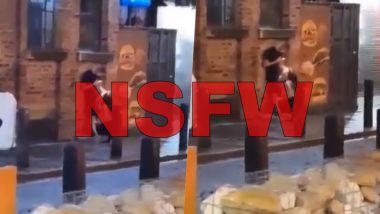 The pair was identified to be 35-year-old Kelly Cousins from Bootle, Merseyside and 23-year-old Joe Firby, from Gateshead. The woman was first identified while the search for her male partner was on, however, on August 8, he was arrested in the Gateshead area by Northumbria Police. They will be produced before the magistrate next month.

A video shows the man standing against the wall with the woman squatting down in front of him, performing the sex act, while they were in full view of hundreds of bystanders in Concert Square, Liverpool. pic.twitter.com/criLoB9VWM

Liverpool Mayor Joanne Anderson was quoted saying, "I am extremely shocked and concerned at videos circulating showing acts of indecent exposure and sexual activity in our city. This isn’t amusing – it’s disturbing, damaging and an illegal act."

(The above story first appeared on LatestLY on Aug 09, 2022 06:21 PM IST. For more news and updates on politics, world, sports, entertainment and lifestyle, log on to our website latestly.com).